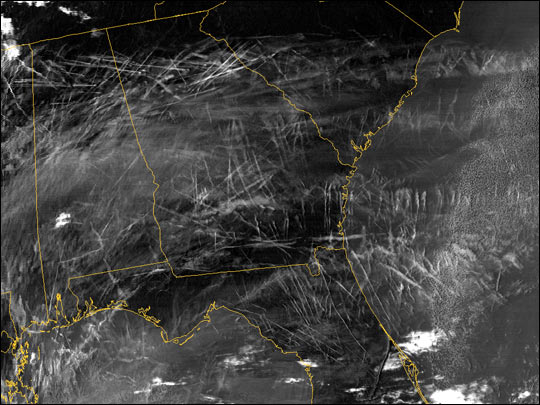 NASA scientists have found that cirrus clouds, formed by contrails from aircraft engine exhaust, are capable of increasing average surface temperatures enough to account for a warming trend in the United States that occurred between 1975 and 1994. According to Patrick Minnis, a senior research scientist at NASA’s Langley Research Center in Hampton, Va., there has been a one percent per decade increase in cirrus cloud cover over the United States, likely due to air traffic. Cirrus clouds exert a warming influence on the surface by allowing most of the Sun’s rays to pass through but then trapping some of the resulting heat emitted by the surface and lower atmosphere. Using a general circulation model, Minnis estimates that cirrus clouds from contrails increased the temperatures of the lower atmosphere by anywhere from 0.36 to 0.54°F per decade. Minnis’s results show good agreement with weather service data, which reveal that the temperature of the surface and lower atmosphere rose by almost 0.5°F per decade between 1975 and 1994.

This enhanced infrared image from the Moderate Resolution Imaging Spectroradiometer (MODIS), aboard NASA’s Terra satellite, shows widespread contrails over the southeastern United States during the morning of January 29, 2004. Such satellite data are critical for studying the effects of contrails. The crisscrossing white lines are contrails that form from planes flying in different directions at different altitudes. Each contrail spreads and moves with the wind. Contrails often form over large areas during winter and spring.

For information about why NASA studies contrails, read: Clouds Caused By Aircraft Exhaust May Warm The U.S. Climate.

NASA scientists have found that cirrus clouds, formed by contrails from aircraft engine exhaust, are capable of increasing average surface temperatures enough to account for a warming trend in the United States that occurred between 1975 and 1994.