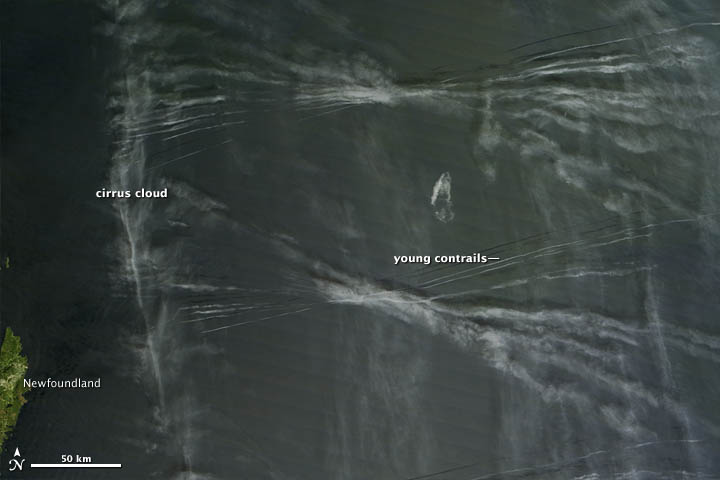 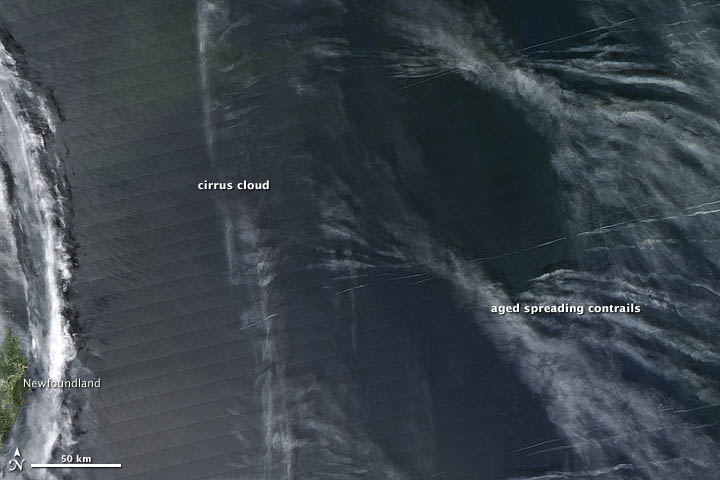 Most of the gases and particles suspended in our atmosphere are invisible to human eyes. But that's not the case with contrails. Look up on a clear day, and there's a good chance you'll see some of these pencil-straight cirrus clouds crisscrossing the sky. While naturally high levels of humidity cause cirrus clouds to form, contrails form in the wake of passing aircraft due to the extra particles and water vapor contained in their exhaust.

Contrails are visible from space as well. At 12:05 p.m. local time (14:35 UTC) on May 26, 2012, the Moderate Resolution Imaging Spectroradiometer (MODIS) on NASA’s Terra satellite captured a view (top) of multiple contrails off the coast of Newfoundland, Canada. The MODIS instrument on the Aqua satellite generated an image (bottom) of the same area nearly two hours later.

The contrails are arrayed in an X-shaped pattern that was likely caused by commercial aircraft flying west. A cirrus cloud, most likely of natural origins, is visible on the left of both images. Young contrails with distinct edges are visible in the older image, but in the later view the contrails have grown wispier and spread outward as winds have blown them south and east.

The temperature and humidity of the air affects how long contrails last. When air is dry, contrails last just seconds or minutes. But when the air is humid, as was the case here, contrails can be long-lived and spread outward until they become difficult to distinguish from naturally occurring cirrus clouds. Satellites have observed clusters of contrails lasting as long as 14 hours, though most remain visible for four to six hours.

These opposing effects make it difficult for scientists to pin down the effect contrails have on climate. “Overall, contrails create additional cirrus cloud cover,” noted Patrick Minnis, a senior scientist at NASA's Langley Research Center. “Current estimates indicate that contrails have a small warming effect, but the extent of the additional coverage and the amount of warming remain quite uncertain.”

In 2004, Minnis published a study of surface observations that found cirrus cloud cover had increased by 3 percent between 1971 and 1995 over the United States. That's the most recent estimate available, Minnis pointed out, because the network of surface instruments his research group used is no longer available.