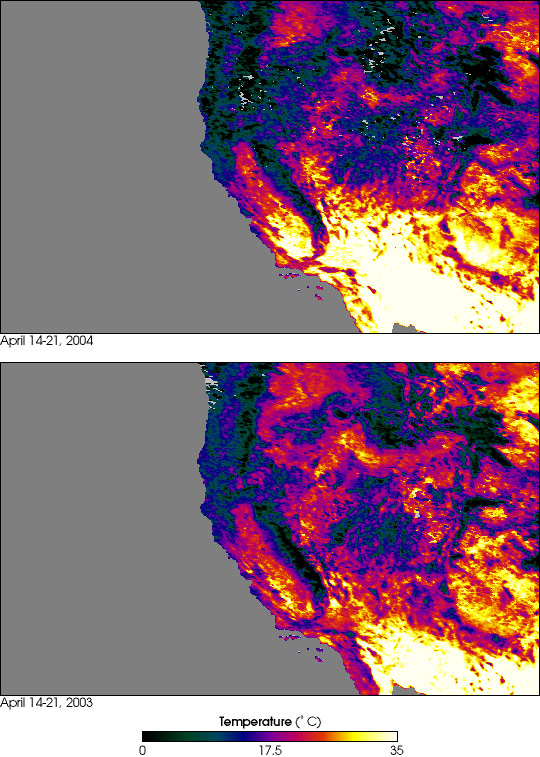 In mid-April, a high-pressure system settled in over California and persisted for most of the next two weeks, bringing a record-setting heatwave to much of the state. The unusually hot weather peaked on April 26, 2004, when temperatures reached triple digits (Fahrenheit) across much of the southern part of California. Local weather services reported 100°F in Santa Maria, 101°F in Long Beach, and a blistering 106°F (41°C) in Chino, California. In downtown Los Angeles, the weather service reported 99°F, which is 8 degrees hotter than the previous high of 91°F set back in 1972. Temperatures in San Francisco typically hover around 65°F (18°C) this time of year, but on April 26 thermometers soared to 88°F (31°C).

In a state plagued by rolling blackouts, drought and wildfires last year, state and local officials are concerned that this could signal the onset of another uncomfortably hot summer. Some state officials are already urging consumers to closely monitor electricity use. Moreover, there is talk of putting restrictions on water use, even as firefighting officials report there is an extremely high danger of wildfire outbreaks across Southern California due to the prevailing dry conditions. Last year, wildfires consumed about 750,000 acres and destroyed more than 3,500 homes in the southern part of the state.

The false-color images above represent surface temperatures for roughly the western half of the United States. The images were produced using data collected by the Moderate Resolution Imaging Spectroradiometer (MODIS), flying aboard NASA’s Terra satellite, from April 14-21 in 2004 (top) and 2003 (bottom). A visual comparison of these 8-day composite images reveals that temperatures were significantly hotter in Southern California this year as compared to the same time last year. (The white and yellow regions show the hottest temperatures while blues, greens and black are progressively colder.)