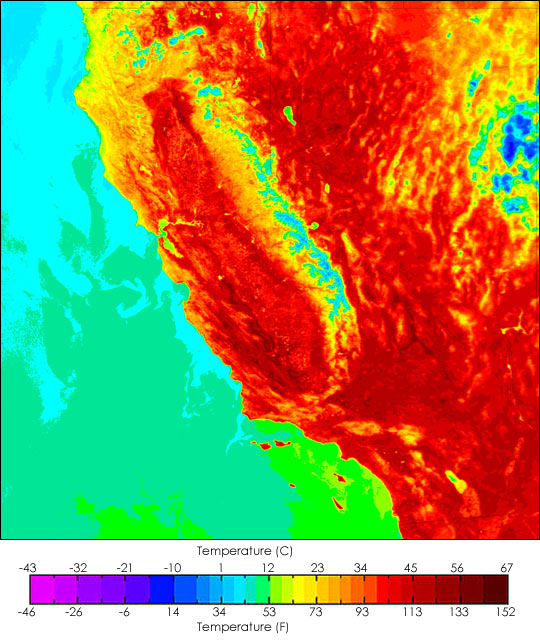 Record-breaking temperatures broiled much of California on May 2, 2004, as an ongoing spring heat wave continued to plague the region. According to the Associate Press, sixteen areas in Southern California set new record highs for the day, including downtown Los Angeles, which reached 97 degrees Fahrenheit (36 C). The new record in Long Beach, 102 degrees F (39 C), outpaced the previous record by 10 degrees F.

Baked in the summer sun, the land had reached sizzling hot temperatures, nearing 150 degrees F (70 C) when the Moderate Resolution Imaging Spectroradiometer (MODIS) flew over on the Aqua satellite at 2:20 pm, US Pacific time. Land temperatures are often higher than air temperatures. A sandy beach can be painfully hot even though the air temperature is comfortable, for example. This image shows the extreme high temperatures in Southern California and Nevada in dark red. The Sierra Nevada Mountains, still capped with snow, form a cool blue line down the eastern edge of the state.

The high-resolution image provided above is at MODIS’ maximum resolution of 250 meters per pixel. The image is available in additional resolutions.