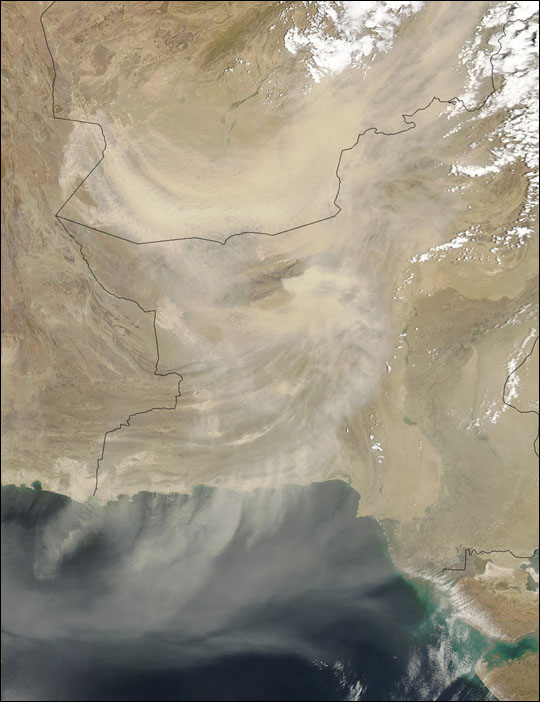 A new and massive dust storm (light brown) erupted out of the Sistan Basin straddling the border between Iran and Afghanistan on April 29, 2004. The dust blew southward and spread out over a wide area, covering most of southern Afghanistan and western Pakistan. (The borders between those countries are traced here in black.) The dust can be seen here extending well out over the Arabian Sea (bottom).

For more than five millennia, the Sistan Basin served as a cradle for life in what was once a 2,000-square-km (800-square-mile) wetland ecosystem known as the Hamoun Wetlands. Fed mainly by the springtime meltwater running off the mountains to the north and coursing through the Helmand River, the Hamoun Wetlands were replenished every year so that for thousands of years the region was an abundant source of fish, game, and fresh water for farming. But with unprecedented population growth in the region throughout the 20th century, coupled with a relatively sudden and dramatic increase in irrigation off of the Helmand River, the Hamoun Wetlands have almost completely dried up within the last 5 years. What was once a lush ecosystem teeming with life has been replaced by a mostly lifeless salt pan. (For more details, please read From Wetland to Wasteland.) The light, silty lakefloor is now vulnerable to the intense heat and strong winds often experienced in this region that, in recent years, have been generating some very impressive dust storms that appear to be increasing in both frequency and severity.

This true-color image was captured on April 29, 2004, by the Moderate Resolution Imaging Spectroradiometer (MODIS) aboard NASA’s Aqua satellite. The high-resolution copy available here is 500 meters per pixel. Additional resolution copies of this image are also available.