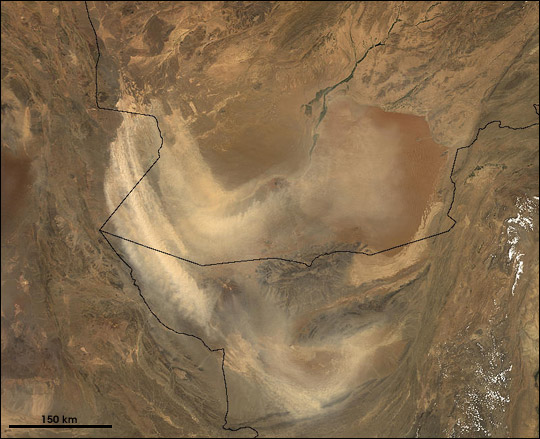 On August 17, 2004, the Moderate Resolution Imaging Spectroradiometer (MODIS), aboard NASA’s Terra satellite, observed a large plume of dust blowing out of the Sistan Basin and fanning out over a large portion of southern Afghanistan and northern Pakistan. Once a lush oasis spanning more than 2,000 square kilometers (800 square miles), the Hamoun Wetlands were a major source of food and shelter for the people of Central Asia. Within the last decade, however, human mismanagement of the rivers feeding the once fertile wetlands has converted them mostly into salt flats—desiccated and almost devoid of life.

The light sediment that once rested on the bottom of the Hamoun’s marshes now lies exposed to sun and wind. The frequent strong winds blowing through the region easily scoop up the dried silt and carry it aloft for hundreds or even thousands of kilometers. Such dust storms appear to be increasing in frequency and severity as residents in southern Afghanistan report that, during the last several years, the skies overhead have been the dustiest in living memory.

The solid black line in this scene shows the border between the countries of Iran (to the left), Afghanistan (top), and Pakistan (bottom right). North in this image is toward the top. The high-resolution copy available here is 250 meters per pixel. There are also additional resolutions available.

Dust Storms in Afghanistan and Pakistan