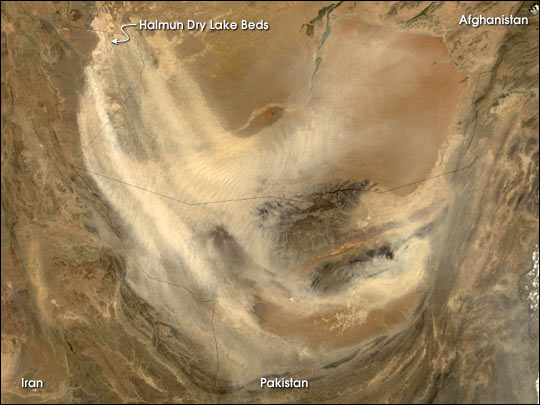 Across the dark brown ridges and rock formations of southern Afghanistan (top), Iran (left), and Pakistan (bottom right), streamers of pale dust swirl over the arid terrain in this true-color image acquired on August 20, 2003, by the Moderate Resolution Imaging Spectroradiometer (MODIS) aboard NASA’s Terra satellite. According to people living in southwestern Afghanistan, this has been the dustiest year in living memory, as wave after wave of dust storms has swept over the region this summer. Many of these dust storms originated in the dry salt flats where there was once a lush oasis of lakes and wetlands straddling the border between Afghanistan and Iran.

For more than 5,000 years the Hamoun wetlands served as a primary source of food and shelter for the people in Central Asia. Fed by the Helmand River, the Sistan basin held two large lakes and a large expanse of wetlands, all together covering roughly 2,000 square kilometers (800 square miles). The Sistan basin was a thriving blue-green oasis set amid the various tan and brown hues of surrounding deserts and dry plains that reach for hundreds of kilometers in every direction. But just within the last 5 years, drought combined with over irrigation have choked the flow of the Helmand River and all but erased the Hamoun wetlands, leaving only drying reed stands amid a desiccated landscape to mark its passing. (For more details, please see From Wetland to Wasteland.)

In addition to producing severe dust storms—which not only adversely impact air quality but also inhibit rainfall in the region—the destruction of the Hamoun wetlands also presents significant risk to the region’s biodiversity. In December 2002, the Iranian government called upon Afghanistan to help restore the Sistan basin, noting that the wetlands support “an extremely diverse wetland flora and fauna, and thus maintain the genetic and ecological diversity of the region.”