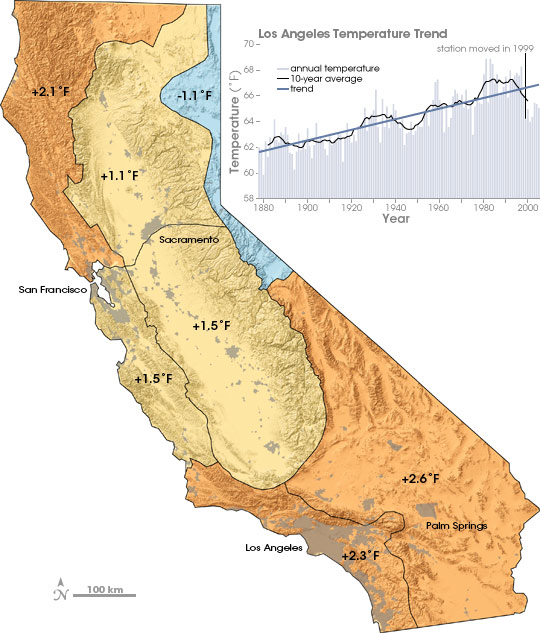 Average temperatures in California rose nearly two degrees Fahrenheit during the second half of the 20th century, with urban areas blazing the way to warmer conditions. When scientists at NASA and California State University, Los Angeles, analyzed observations from 331 weather stations between 1950 and 2000, they found that average temperatures rose in 6 out of 7 of the state’s major climatic sub-regions. The scientists concluded that small increases measured in many rural areas may reflect the contribution of global warming due to rising greenhouse gas concentrations. Larger changes in and around urban areas are mostly due to growing population and the conversion of natural areas to urban ones.

California’s seven climate sub-regions are separated by black lines on the map. Regions where the average surface air temperature climbed less than 2 degrees are colored yellow, while areas where temperatures climbed more than 2 degrees are orange. The only region where temperatures dropped is colored light blue. Urban areas are colored gray. The greatest warming occurred in southern California’s urbanized areas, including Los Angeles and rapidly growing Palm Springs. Urban areas raise average temperatures mostly by preventing an area from cooling off at night. According to one of the study’s authors, NASA climatologist Bill Patzert, “California nights are heating up, giving us a jump start on hotter days.”

The drop in temperatures observed at the end of the 20th century resulted from the relocation of the official “downtown” Los Angeles station away from the more built-up part of the city to a more natural setting on the campus of the University of Southern California. The old site has so far remained operational, which gives scientists a chance to account for the impact of the move on long-term trends.