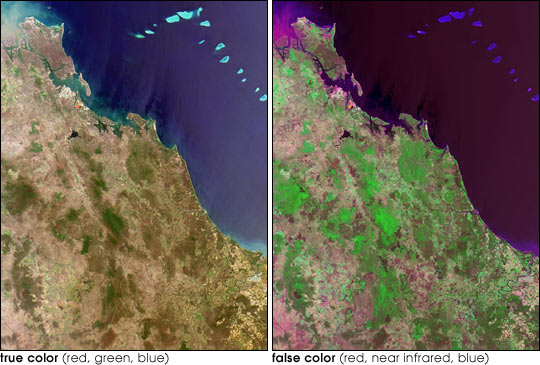 Here’s another chance to play geographical detective! These images from the Multi-angle Imaging SpectroRadiometer (MISR) were captured by the instrument’s nadir camera on November 19, 2001, and show a natural-color (left) and false-color (right) view of a 157 kilometer x 210 kilometer area. The natural-color image is composed of data from the camera’s red, green, and blue bands. In the false-color view, the green channel has been replaced with data from the camera’s near-infrared band. This emphasizes the appearance of vegetation. North is toward the top.

Use any reference materials you like to answer the following 5 questions:

Quiz Rules
E-mail your answers, name (initials are acceptable if you prefer), and your hometown by Tuesday, October 29, to suggestions@mail-misr.jpl.nasa.gov

A new "Where on Earth...?" mystery appears as the MISR "image of the week" approximately once every two months. A new image of the week is released every Wednesday at noon Pacific time on the MISR home page.