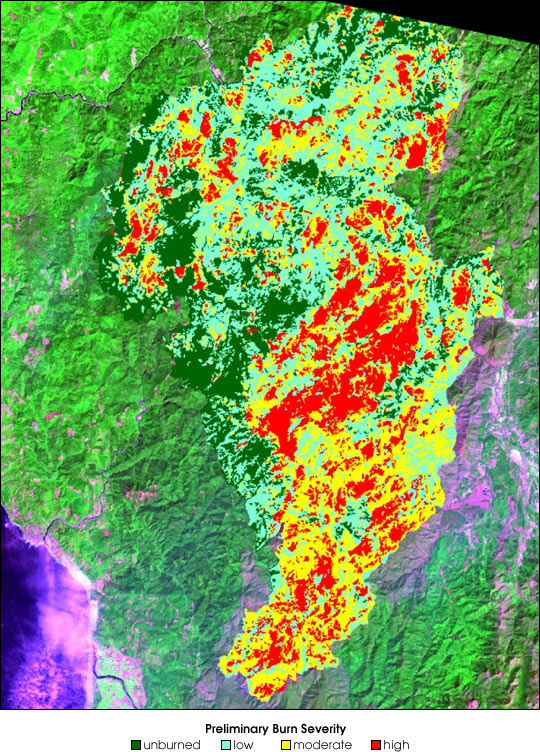 Preliminary satellite-based maps that categorize burn severity give BAER teams a head start as they make their on-the-ground observations. Usually based on observations of vegetation and soil characteristics, burn severity maps show the mosaic of different burn conditions produced by most fires. Computer algorithms interpret the data and categorize each pixel within the burn perimeter as unburned, low, moderate, or high severity.

This image shows the preliminary burn severity classification of the roughly half-million-acre Biscuit Fire that burned in southwest Oregon in July and August 2002. The southern portion of the fire shows greater amounts of moderate (yellow) and high (red) severity burned areas, while the northern part of the fire has more isolated patches of high severity mingled with low severity (light green) and even unburned areas (dark green).

Using data from multiple NASA and commercial satellites, as well as aircraft sensors, scientists from University of Maryland and the Remote Sensing Applications Center of the U.S.D.A. Forest Service have been working together to put satellite-based burn severity maps into the hands of BAER teams during the fire seasons of 2001 and 2002. The products have proven helpful to the teams as they plan how to use their limited time and resources for ground-based surveys. To read more about satellite-based burn severity mapping, read Satellites Aid Burned Area Rehabilitation.