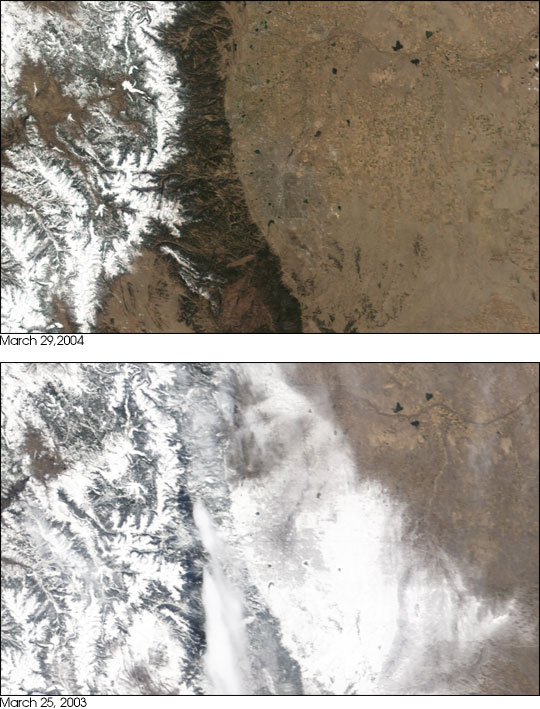 On March 18 and 19, 2003, Denver was hit with the worst blizzard of the past century. With 30 inches of snow in the valley, and up to 87 inches in the mountains, the storm brought normal life to a standstill. In contrast, March 2004 was one of the warmest and driest on record. On April 1, 2004, the snowpack—the amount of snow in the mountains—in Colorado was 65 percent of the 30-year average, according to the Natural Resources Conservation Service. At the same time last year, the snowpack was 94 percent of average.

The contrast between the two years is evident in these Moderate Resolution Imaging Spectroradiometer (MODIS) images. In the top image, taken on March 29, 2004, by the Terra satellite, the Rocky Mountains are conspicuously bare of snow. To their right, Denver is barely visible as a grey sprawling circle against the tan of the winter-brown plains. In the lower image, taken on March 25, 2003, the city is completely hidden under a blanket of white snow.

Though the record-breaking snow of March 2003 helped, it was not enough to break an ongoing drought. Colorado, like most western states, gets most of its water supply from snow. The lack of snow this year is pushing the state into its fifth year of drought.