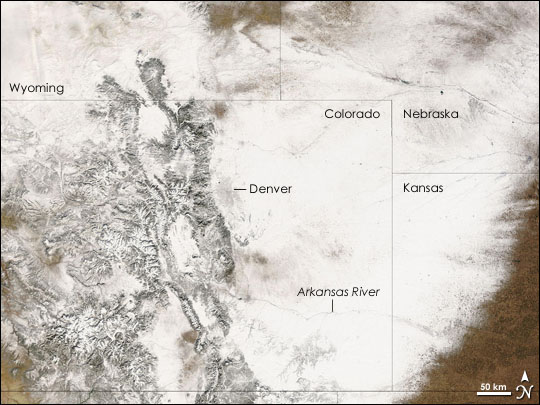 The Moderate Resolution Imaging Spectroradiometer (MODIS) on NASA’s Terra satellite captured this image on January 7, 2007. In this relatively cloud-free image, nearly the entire state of Colorado is buried under a blanket of snow. Only a small patch in the southwest corner of the state remains relatively dry. Snow cover extends well into Kansas and Nebraska—not surprising as the weekly snowstorms moved off in that direction. The metropolitan Denver area appears as a pale gray patch where buildings and paved surfaces interrupt the snow cover. Likewise, the mountains to the west of Denver carve meandering lines in the snow cover. The western portion of the state generally saw less snowfall than the eastern plains.

As of January 8, 2007, a fourth weekly storm was predicted to hit the area a few days later. Added to the snow were high winds, with gusts up to 185 kilometers (115 miles) per hour creating snowdrifts up to 1.2 meters (4 feet) high on the roads between Denver and Boulder, home to the University of Colorado. The drifts trapped some drivers for hours. According to the Rocky Mountain News, another unlucky group of drivers were buried in their cars when an avalanche covered part of U.S. Highway 40 in the Colorado mountains on January 6, 2006.