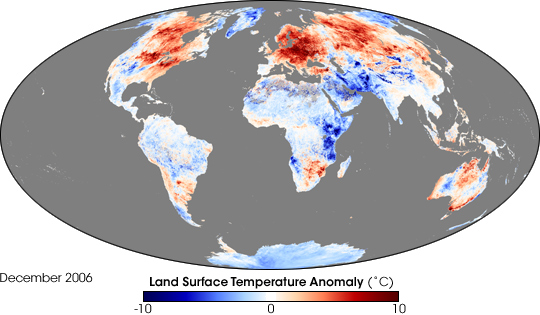 As of early January 2007, the 2006-2007 Northern Hemisphere winter was proving to be a mild one in terms of temperatures. In North America, significant snows had yet to fall in many of the usual places, including most of New England. In the United States’ capital, the city’s famous cherry trees welcomed the new year with blooms—a show they don’t normally put on until spring. In Europe, World Cup ski events had to be moved, postponed, or canceled because of lack of snow in the mountains.

The unusually warm temperatures are apparent in this image, which shows the December 2006 land surface temperature compared to the average December temperatures from 2000-2005. (Land surface temperatures are how hot or cool the land surface would feel to the touch. It is different from the air temperature, which is what weather stations usually measure.) Based on data from the Moderate Resolution Imaging Spectroradiometer (MODIS) on NASA’s Terra satellite, the image shows places where daytime land surface temperatures were above the five-year average in red, places where it was below the average in blue, and places near the average as white. Dramatic swaths of red paint most of the Northern Hemisphere. In parts of Central Canada, the North American Great Lakes region, eastern and northern Europe, and central Siberia, the land surface was up to 10 degrees Celsius warmer than in the recent past. This pattern of unusual warmth across both North America and Eurasia is different from conditions observed by MODIS in the previous winter; in January 2006, North America was warmer than average, while Eurasia was chillier than average.

A few notable colder-than-normal spots stand out in the image. In the central United States, several whopping snow storms laid down a chilly blanket over the land surface in late December, creating a blue ribbon of cooler-than-normal temperatures that stretched northeastward from Colorado to Lake Michigan. Both Russia’s Far East (upper right) and Southwest Asia were cooler than average, as well. Persistent heavy rains in East Africa in late 2005 may be responsible for that region’s cooler-than-average condition in December.

Since (Northern Hemisphere) fall 2006, an El Niño had been brewing in the Pacific Ocean, making ocean surface temperatures in the eastern Pacific warmer than average and those in the Western Pacific cooler than average. During moderate to strong El Niño events, winters in the United States are often mild, with above-average precipitation in the country’s southwest and southeast.