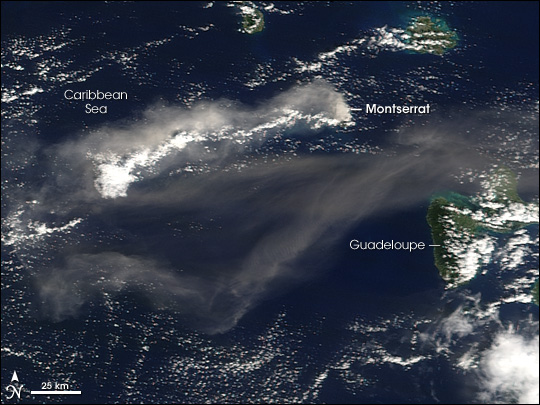 On January 8, 2007, the Soufriere Hills Volcano on the Caribbean island of Montserrat erupted, shooting a cloud of volcanic ash and gas 8 kilometers (5 miles) into the sky. According to the Associated Press, the director of the Montserrat Volcano Observatory described this eruption as a warning of possible future activity. The volcano’s lava dome continued growing as it had since December 24, 2006, and authorities worried that, because the January 8 eruption did not collapse the lava dome, pressure building inside the dome could cause an explosive eruption.

The Moderate Resolution Imaging Spectroradiometer (MODIS) on NASA’s Terra satellite captured this image on January 8, 2007. Shifting winds apparently pushed the plume in different directions the day of the eruption. This image shows the gray-beige volcanic ash cloud tracing a zigzag pattern over the Caribbean. Initially, the plume blows to the west, then doubles back to the east, then toward the southwest, and finally toward the northwest, where it dissipates. In the first part of the plume’s path, a bright white cloud accompanies the ash. This cloud might be steam released by the volcano, but it could also be a cloud that happened to be in the plume’s path.

Soufriere Hills is a stratovolcano made from alternating layers of hardened ash, lava, and rock. Except for a 17th-century eruption, the volcano remained quiet in historical times before resuming activity in 1995. In 1997, the volcano destroyed Montserrat’s capital city of Plymouth. The January 8, 2007, eruption prompted local officials to order a partial evacuation of the island.

A 250-meter-resolution KMZ file of the Soufriere Hills eruption is available for use with Google Earth.