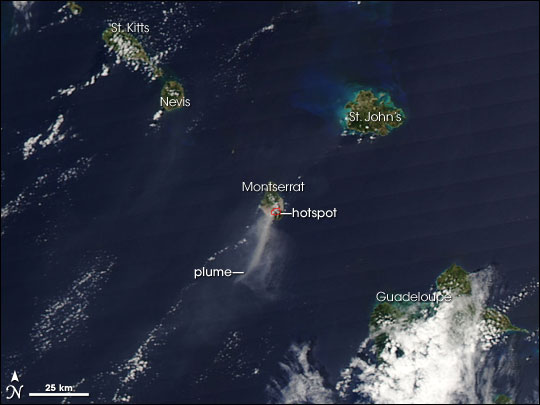 Soufriere Hills Volcano on the Caribbean island of Montserrat continued emitting a plume of ash and steam on February 19, 2007, continuing its intermittent pattern of activity. The Moderate Resolution Imaging Spectroradiometer (MODIS) on NASA’s Aqua satellite took this picture as the volcano sent its plume southward over the ocean. In this image, the plume appears pale beige in color, suggesting some volcanic ash content. Besides a darker color, the volcanic plume possesses a less distinct outline than the nearby bright white clouds.

Soufriere Hills is a stratovolcano made from alternating layers of hardened ash, lava, and rock. Except for a 17th-century eruption, the volcano remained quiet in historical times before resuming activity in 1995. In 1997, the volcano destroyed Montserrat’s capital city of Plymouth. More recently, the volcano experienced a severe eruption in May 2006.

The Soufriere Hills Volcano released plumes of ash and steam in mid to late February 2007.