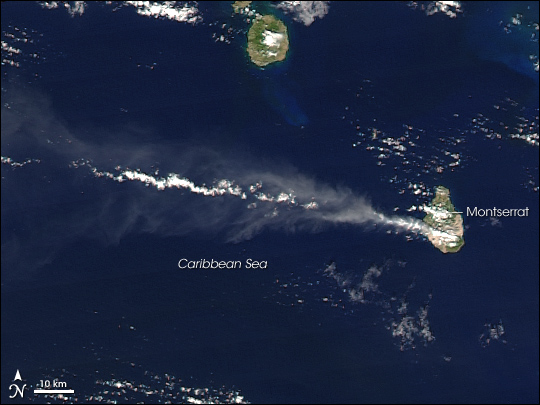 On February 14, 2007, the Moderate Resolution Imaging Spectroradiometer (MODIS) on NASA’s Aqua satellite caught the Soufriere Hills Volcano in the process of releasing a plume of ash and steam. The volcano had been intermittently active for days when this image was acquired. This image shows the volcano, located on Montserrat, sending a plume westward over the Caribbean. The darker, more diffuse part of the plume likely derives its color from volcanic ash. Although the bright white puffs directly over the plume could be clouds passing overhead, their exact correlation with the plume suggests that they contain water vapor released by the volcano.

Soufriere Hills is a stratovolcano made from alternating layers of hardened ash, lava, and rock. Except for a 17th-century eruption, the volcano remained quiet in historical times before resuming activity in 1995. In 1997, the volcano destroyed Montserrat’s capital city of Plymouth.

The Soufriere Hills Volcano released plumes of ash and steam in mid to late February 2007.