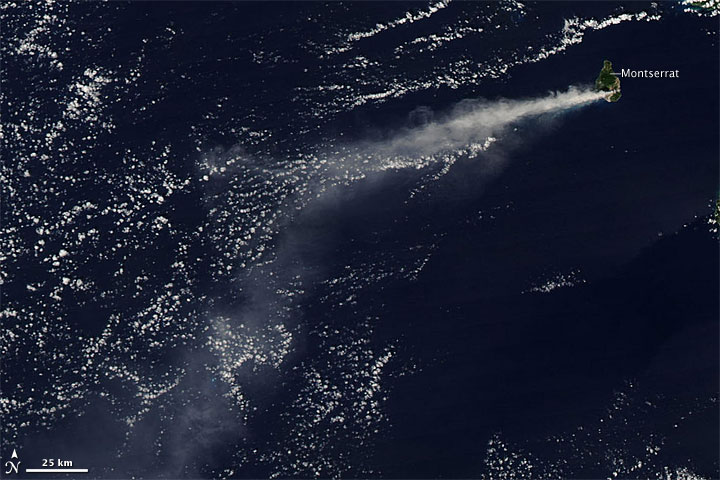 The Soufriere Hills Volcano on the Caribbean island of Montserrat remained active in late December 2008. The Moderate Resolution Imaging Spectroradiometer (MODIS) on NASA’s Aqua satellite captured this image of the area on December 20, 2008. In this image, the volcanic plume is most intense near the volcano, from which it blows west-southwest. Changing wind directions carry the plume southward, creating a smoky clockwise arc southwest of the volcano. In the south, the plume mixes with clouds.

The Montserrat Volcano Observatory’s weekly report for December 12-19, 2008, described lava extrusion from the Soufriere Hill’s dome at roughly the same time as increased pulses of volcanic ash, although the two events were not necessarily occurring at the same location.

Soufriere Hills is a stratovolcano composed of alternating layers of hardened lava, solidified ash, and rocks ejected by previous eruptions. In 1995, a series of major eruptions from this volcano eventually destroyed the island’s capital city, Plymouth. Prior to that event, a seventeenth-century eruption was the only historical eruption recorded from this volcano. The volcano experienced an explosive eruption in early December 2008, and it steadily released plumes afterwards.

Activity continued on the Soufriere Hills Volcano through the end of 2008, including pyroclastic flows and ash plumes.

The Soufriere Hills volcano on the Caribbean island of Montserrat continued releasing ash and steam in mid-December 2008.