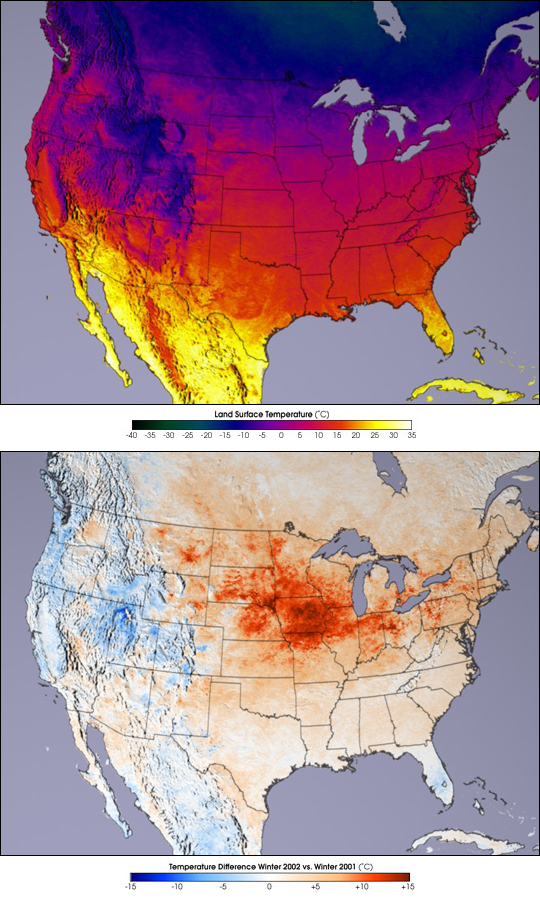 New maps of land surface temperature and snow cover produced by NASA’s Terra satellite show this year’s winter was warmer than last year’s, and the snow line stayed farther north than normal. The observations confirm earlier National Oceanic and Atmospheric Administration reports that the United States was unusually warm and dry this past winter. (Click to read the NASA press release and to access higher-resolution images.)

For the last two years, a new sensor aboard Terra has been collecting the most detailed global measurements ever made of our world’s land surface temperatures and snow cover. The Moderate-resolution Imaging Spectroradiometer (MODIS) is already giving scientists new insights into our changing planet.

Average temperatures during December 2001 through February 2002 for the contiguous United States appear to have been unseasonably warm from the Rockies eastward. In the top image the coldest temperatures appear black, while dark green, blue, red, yellow, and white indicate progressively warmer temperatures. MODIS observes both land surface temperature and emissivity, which indicates how efficiently a surface absorbs and emits thermal radiation.