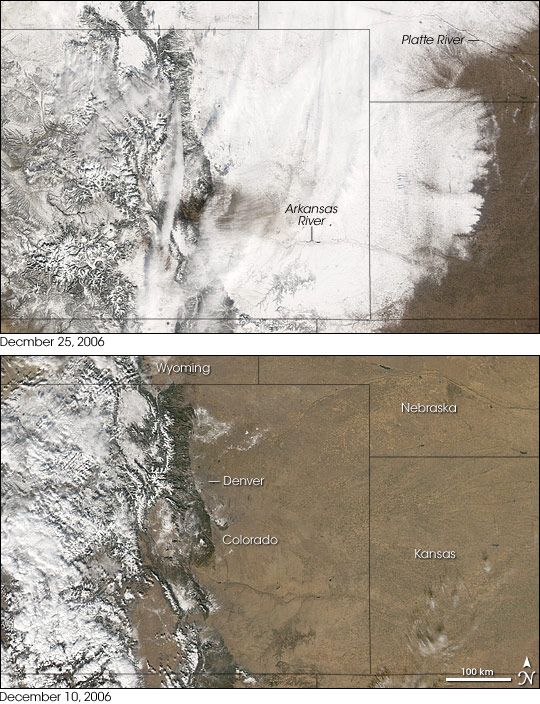 Coloradoans hoping for a white Christmas saw too much of a good thing in December 2006. On December 20 and 21, a blizzard buried much of the state in heavy snow. According to the National Weather Service, snowfall amounts reached 112 centimeters (44 inches) in some locations. Because Denver International Airport is a hub for some airlines, the storm affected air travel nationwide, stranding thousands of passengers in Denver and elsewhere. According to news reports, frustrated commuters in the Denver metro area abandoned hundreds of automobiles along major roadways and sought the nearest shelter they could find. The governor of Colorado declared a disaster emergency and activated the National Guard to assist with rescue efforts. Although life began returning to normal a week after the storm, many Colorado grocery store shelves remained bare of perishable items like eggs, dairy, and fresh produce. Meanwhile, the storm moved off to the Great Plains.

The Moderate Resolution Imaging Spectroradiometer (MODIS) sensors on NASA’s Aqua and Terra satellites captured these relatively cloud-free images of Colorado on December 10 and 25, 2006. On December 10, snow cover in Colorado was confined largely to the mountains and western part of the state. By December 25, almost the entire state was blanketed in snow, as were parts of Kansas and Nebraska. On December 25, only the Arkansas River and an area south of Denver contrasted with the snowy whiteness.

The blizzard beginning on December 20 was not the state’s final snowstorm in 2006. Heavy snow continued to beleaguer Colorado residents in the days that followed. Light snow fell on December 24, icing many roadways, and on December 28, a new storm threatened to rival the first blizzard’s accumulation totals.

A 250-meter-resolution KMZ file of the snowstorm is available for use with Google Earth.