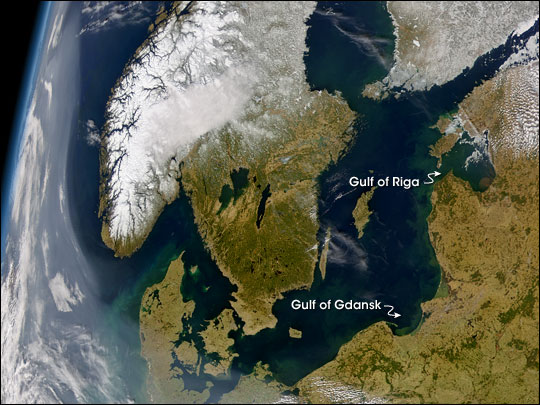 April 1, 2004, was a sunny spring day for most of Scandinavia and the Baltic States, though a region of hazy air lurked offshore to the west and to the south. The cloud-free skies gave the Sea-viewing Wide Field-of-view Sensor (SeaWiFS) on the OrbView-2 satellite a clear view of the Baltic region. On the left, the lingering snow highlights the varied geology of the Scandinavian Peninsula. The thick snow that clings to Norway’s mountains provides a stark contrast to the dark fingers of water, fjords, that cut into the land, making it appear even more formidable. To the east, the snow has largely melted, remaining only in Sweden’s northern highlands. The forests of the south are bringing hints of green to the winter-brown land.

Green and brown clouds of sediment taint the waters of the Gulf of Riga and the Gulf of Gdansk, as much a sign of spring as the disappearing snow and greening landscape. As the temperatures climb, melting snow swells the rivers that snake through the Baltic lowlands, sweeping dirt into the Baltic Sea. The sediment colors the water brown where the dirt is concentrated, and green, when it is dispersed. Here, the Daugava River is sending a muddy plume into the Gulf of Riga in Latvia, while to its south, Poland’s Wisla River is only clouding the Gulf of Gdansk enough to color the water green. Alternatively, the clouds of green could also be caused by spring phytoplankton blooms, microscopic plants that grow on the surface of the water. Such blooms are common in the Baltic this time of year.

The Baltic States line the eastern shores of the Baltic Sea: Estonia in the north, Latvia in the center, and Lithuania in the south. Because of their position on the Baltic Sea, the original settlers of these countries, the Balts, remained culturally isolated until the 9th Century, when Vikings invaded, followed by German knights in the 12th century. As a result, Lithuanian and Latvian are among the oldest and most unchanged Indo-European languages. More recently, the Baltic States were caught in the Cold War tug-of-war between east and west. They became part of the former Soviet Union in 1940, and regained their independence in 1991. This week, on March 29, the three countries joined the North Atlantic Treaty Organization (NATO). On May 1, they are scheduled to become part of the European Union.