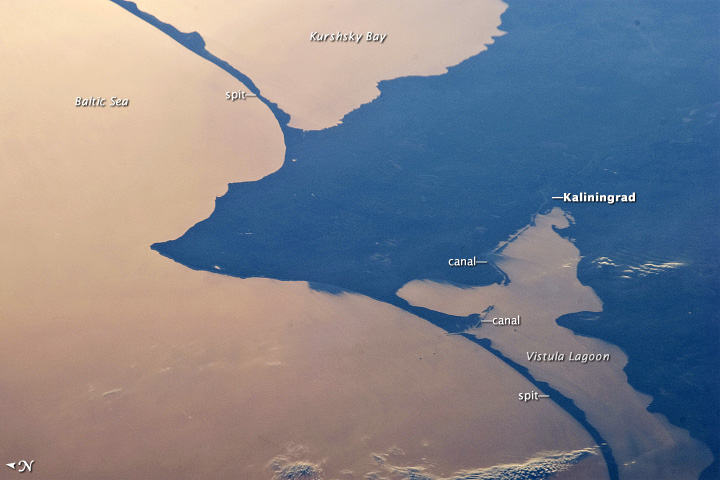 This photograph from the International Space Station captures two great lagoons to the north and south of Kaliningrad, Russia. A broad arm of agricultural country separates the freshwater lagoons—Vistula Lagoon and Kurshsky Bay (which is known as the Curonian Lagoon in nearby Lithuania). Each is protected from the open waters of the Baltic Sea by the thin, perfect curves of current-generated sand spits.

From an astronaut’s perspective in low-Earth orbit, land surfaces usually appear brighter than water. But in this image, reflected sunlight, or sunglint, inverts this pattern. The light has a coppery hue, perhaps due to smog particles in the air, which can enhance the red part of the spectrum. More likely, the color comes from the angle of sunlight around dawn.

The camera settings used to acquire sunglint images result in high contrast, which reveals the fine detail of coastlines and surface features of water bodies, while masking land surface details. The thin, 50 kilometer (30 mile) barge canal leading from the Baltic to Kaliningrad is visible, but the great port of Kaliningrad itself is not. Other human patterns on this intensively developed landscape—such as towns, highways and farm boundaries—are likewise masked.

The area has a long human history. The growth of the Vistula spit finally cut off the north Polish city of Elblag (just beyond the bottom of the image) from the Baltic Sea in the 13th century. To reconnect Elblag with the Baltic Sea, the European Union is considering whether to fund the creation of another canal through the spit at image lower right, despite ecological concerns.

As the only Russian port on the Baltic Sea to be ice-free year-round, Kaliningrad gained strategic importance as home of the Baltic Fleet in the mid-20th century. The city’s 750th anniversary was celebrated in 2005, with increasing use of its original name, Koenigsberg, reflecting the return of older names for cities.

Astronaut photograph ISS028-E-24146 was acquired on August 2, 2011, with a Nikon D3S digital camera using a 400 mm lens, and is provided by the ISS Crew Earth Observations experiment and Image Science & Analysis Laboratory, Johnson Space Center. The image was taken by the Expedition 28 crew. The image has been cropped and enhanced to improve contrast. Lens artifacts have been removed. The International Space Station Program supports the laboratory as part of the ISS National Lab to help astronauts take pictures of Earth that will be of the greatest value to scientists and the public, and to make those images freely available on the Internet. Additional images taken by astronauts and cosmonauts can be viewed at the NASA/JSC Gateway to Astronaut Photography of Earth. Caption by M. Justin Wilkinson, Jacobs/ESCG at NASA-JSC.

City lights trace the coastlines, while moonlight illuminates the snow and clouds.