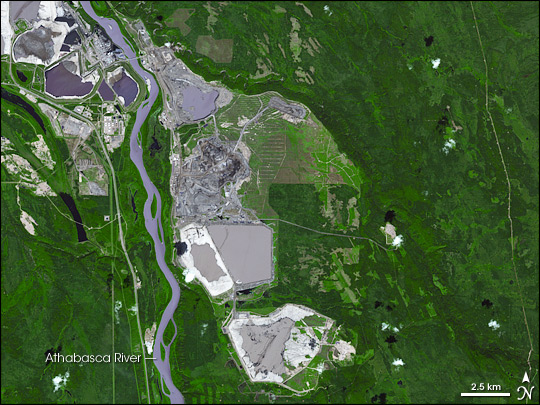 The United States imports more oil from Canada than from any other country: more than 1.8 million barrels a day on average in 2007 according to the U.S. Energy Information Administration (based on statistics through September). One of Canada’s largest sources of oil is the Athabasca Oil Sands. The oil sands are a mixture of bitumen (a tar-like oil), sand, clay, and water. Unlike many other oil sand deposits in Canada and around the world, the Athabasca Oil Sands are only shallowly buried, which allows them to be surface mined.

This image from the Advanced Spaceborne Thermal Emission and Reflection Radiometer (ASTER) on NASA’s Terra satellite shows the Millennium Open Pit Mine in Alberta, where international oil company Suncor mines the oil sands and produces about 260,000 barrels of oil a day. According to the company’s Website, they hope to be producing 550,000 barrels a day by 2012.

Not surprisingly, such a large-scale operation has transformed the local environment, which is mixture of freshwater rivers and streams, boreal forest, and muskegs (bogs). Huge shovels scoop up hundreds of thousands of metric tonnes of earth each day (1 tonne is 1,000 kilograms, or about 2,200 pounds), which is hauled in immense dump trucks to ore crushers to begin the oil-extraction process. (In some cases, the bitumen is separated from the oil sands underground using steam.) Numerous roads and tailings ponds have been carved out of the wilderness on either side of the Athabasca River. The image was captured on July 31, 2007.