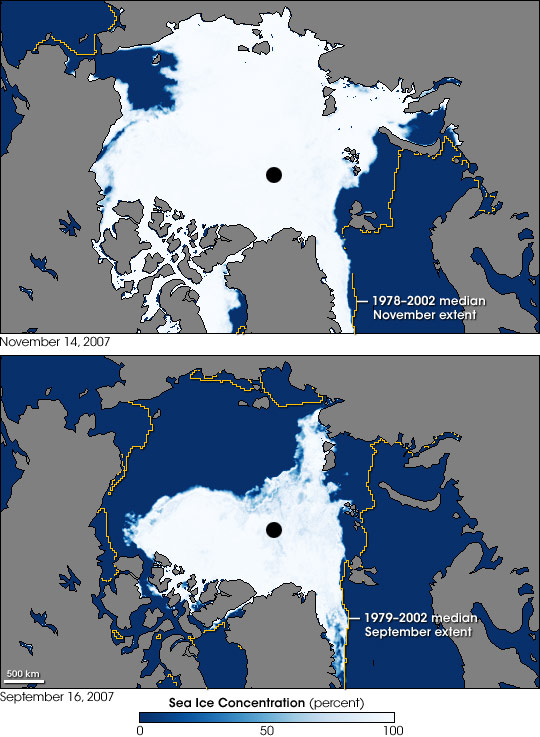 After record retreat in September 2007, Arctic sea ice had been making a slow winter recovery. Mean sea ice extent remained at record-low levels in October 2007, but beginning in late October, sea ice grew by more than 150,000 square kilometers (about 58,000 square miles) per day for about 10 days—the fastest regrowth observed in the satellite record. Despite this rapid growth, sea ice extent remained below normal for November, though it was not a record low.

These images show Arctic sea ice on November 14, 2007 (top), and the record low on September 16, 2007 (bottom). White indicates 100 percent sea ice concentration, and deep blue indicates no sea ice. In each image, the yellow line encompasses the area in which there was at least 15 percent ice cover in at least half of the Novembers in the record (median sea ice extent). The images are based on observations by the Advanced Microwave Scanning Radiometer for EOS (AMSR-E) aboard NASA’s Aqua satellite. The long term record is based on satellite observations collected between 1979 and 2002 by sensors on the Nimbus-7 satellite and three Defense Meteorological Satellite Program satellites.

Clearly, September ice extent was far below normal, and the November 14 image shows significant sea ice growth compared to the image taken two months earlier. The area of persistent open water north of Alaska and eastern Siberia is unusual for this time of year, though not unprecedented. This area was also largely free of ice in November 2002 and especially November 2006.

Record sea ice growth rates after a record low may sound surprising at first, but it is not completely unexpected. The more ice that survives the summer melt, the less open water there is for new ice to grow. When summertime ice extent hits a record low, on the other hand, large areas of open water provide room for the ice to grow once temperatures cool off enough. While summer warming of the upper ocean surface can cause wintertime sea ice regrowth to lag initially, as the fall season progresses and sunlight weakens, the rate of energy loss from the ocean increases. That heat loss coupled with a large area of open water creates ideal conditions for sea ice to form rapidly over large areas.