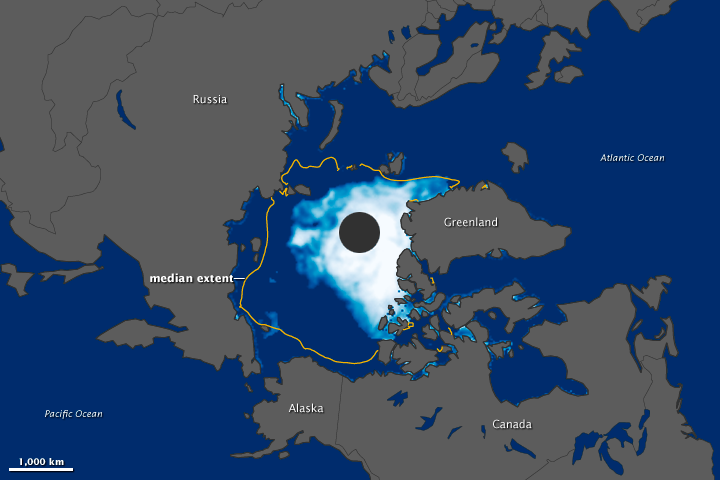 This image was made from observations collected by the Special Sensor Microwave Imager/Sounder (SSMIS) on the satellites of the U.S. Defense Meteorological Satellite Program. Sea ice appears in shades of white and light blue, with white indicating the greatest concentrations of ice. Open ocean water is blue, and land is gray. The yellow outline shows the median minimum ice extent for 1979-2000—in other words, areas that were at least 15 percent ice-covered in at least half the years between 1979 and 2000—on August 26.

In April 2012, Arctic sea ice reached a near-average extent, but periods of intense ice loss in June and August 2012 helped push Arctic sea ice below the previous record from 2007. In 2007, high pressure over the Beaufort Sea and low pressure over northeastern Eurasia pulled in warm winds, which melted the ice and pushed it away from the Siberian and Alaskan coastlines. Although these pressure patterns also occurred in 2012, they were much less persistent. Nonetheless sea ice melt rates still reached up to 150,000 square kilometers (57,900 square miles) per day in 2012, more that twice the long-term rate.

By early July, Arctic sea ice melting was three weeks ahead of schedule, but then slowed somewhat. Ice loss rates picked up again in early August, “probably the highest in the record for that period,” according to NSIDC staff scientist Walt Meier. Because the old record has been passed in August 2012—and Arctic sea ice generally reaches its lowest annual extent in September—it is likely that the amount of ice cover may continue to shrink. NSIDC provides an overview of melt rates in its Arctic Sea Ice News and Analysis blog.

Arctic sea ice reached previous record lows in 2002, 2005, and 2007. (The 2007 record low was previously recorded as 4.13 million square kilometers, or 1.59 million square miles. Slightly different processing and quality-control procedures used by NASA Goddard Space Flight Center led to revised estimates of sea ice extent.) Over the past decade, sea ice extent in the Arctic has been well below the 1979–2000 average.

The loss of so much sea ice means that when ice reforms over the winter, it is “first-year ice,” which is much thinner than sea ice that has persisted over multiple years. Joey Comiso, senior research scientist at NASA Goddard Space Flight Center, explained that the loss of this multiyear ice contributed to record low ice extent in 2012. Another possible factor at work in the summer of 2012, Comiso suggested, may have been a strong summer cyclone, which broke up ice in the Central Arctic and dispersed it into warmer waters.

NSIDC director Mark Serreze differed with Comiso somewhat on the role of the storm. “The ice was already so thin it was ready to go,” said Serreze. “2012 likely would have set a new record without the storm.”

Once sea ice loss gets underway, it can become a self-reinforcing process. Because there is less light-colored ice to reflect the Sun’s energy back into space, more energy is absorbed by darker ocean water.

A new record for sea ice was not the only unusual event in the Arctic in the summer of 2012. July 2012 saw widespread melt on the Greenland Ice Sheet and the calving of a new iceberg from Greenland’s Petermann Glacier. By early August, rapid sea ice retreat left the Northwest Passage nearly open, although ice moved back into parts of the passage later in the month.

The new record low for sea ice in 2012 fits into a larger pattern of a changing Arctic. Regarding the rapid loss of Arctic sea ice, Serreze remarks, “What is perhaps most surprising is that we are no longer surprised.” 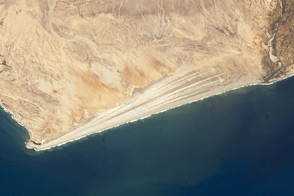