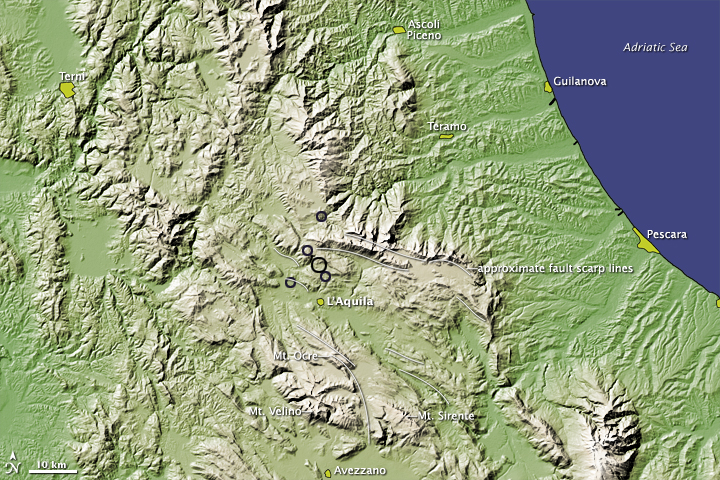 A magnitude 6.3 earthquake hit central Italy on April 6, 2009, killing at least 91 people, and leaving tens of thousands homeless. The government declared a state of emergency, while thousands of rescuers searched for survivors through the rubble of buildings and houses in the medieval city of L’Aquila and nearby small towns.

This image of central Italy shows the rugged topography in the vicinity of L’Aquila, the town closest to the epicenter (largest circle) of the quake. The map is based on data from the Shuttle Radar Topography Mission, which flew on the Space Shuttle Endeavour, launched on February 11, 2000. Lower elevations are shown in green, while higher elevations are light brown and off-white. The direction of the mountain slopes is indicated by shading. Steep, northwest-facing slopes are brightest, while steep, southeast-facing slopes are darkest.

L’Aquila is nestled in the central Apennine Mountains, which run the length of Italy like a spine. The mountains are crisscrossed by dozens of faults, or cracks in the Earth’s crust. The earthquake appears to have occurred along one of the faults in this area. Faults are not always visible at the surface, but in this part of the Apennines, many of them are revealed by steeply sloped fault scarps (bluffs or cliffs that trace the path of the underground fracture). A major fault system is revealed by a scarp running north-northwest from the Focino Plain nearly to L’Aquila, passing along the eastern foothills of Mt. Velino and Mt. Ocre. L’Aquila is wedged between a pair of parallel faults running toward the northwest and a long, broken fault extending toward the east.

The Shuttle Radar Topography Mission was a cooperative project between NASA, the National Geospatial-Intelligence Agency (NGA) of the U.S. Department of Defense, and the German and Italian space agencies, and it was managed by NASA’s Jet Propulsion Laboratory, Pasadena, California.