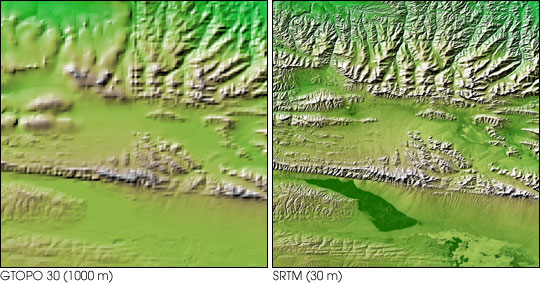 These two images show exactly the same area, part of the Kunlun fault in northern Tibet. The image on the left was created using the best global topographic data set previously available, the U.S. Geological Survey’s GTOPO30. In contrast, the much more detailed image on the right was generated with data from the Shuttle Radar Topography Mission (SRTM), which collected enough measurements to map 80 percent of Earth’s landmass at this level of precision. In a new partnership with the National Imagery and Mapping Agency, data from the SRTM are now being shared with researchers around the world to improve aviation safety, mitigate natural hazards, and contribute to smarter and more sustainable urban development—particularly in underdeveloped countries. (Click to read the press release.)

The area covered in the images above is the western part of the Kunlun fault, at the north edge of east-central Tibet. The sharp line marking the southern edge of the mountains, running left to right across the scene represents a strike-slip fault, much like California’s San Andreas Fault, which is more than 1,000 kilometers (621 miles) long. The most recent earthquake on the Kunlun fault occurred on November 14, 2001. At a magnitude of 8.1, it produced a surface break over 350 kilometers (217 miles) long. Preliminary reports indicate a maximum offset of 7 meters (23 feet) in the central section of the break. This five-kilometer- (three-mile-) high area is uninhabited by humans, so there was little damage reported, despite the large magnitude. Shuttle Radar Topography Mission maps of active faults in Tibet and other parts of the world provide geologists with a unique tool for determining how active a fault is and the probability of future large earthquakes on the fault. This is done by both measuring offsets in topographic features and using the SRTM digital map as a baseline for processing data from orbiting satellites using the techniques of radar interferometry. Based on geologic evidence, the Kunlun fault’s long-term slip rate is believed to be about 11 millimeters per year (0.4 inches per year). The Kunlun fault and the Altyn Tagh fault, 400 kilometers (249 miles) to the north, are two major faults that help accommodate the ongoing collision between the Indian and Asian tectonic plates.

In contrast with the wealth of detail visible in the Shuttle Radar Topography Mission topographic map (right), the best data previously available (left) barely discriminate the sharp break caused by the fault. Note also that the upper left quadrant of the GTOPO30 map was created from a lower-resolution source than the rest of the GTOPO30 data. Another major advantage of the shuttle radar mission is its consistent coverage, unlike previous topography data.

This image combines three visualizations of data from the Shuttle Radar Topography Mission. The image brightness corresponds to the strength of the radar signal reflected from the ground combined with shaded relief derived from the mission’s topography measurements, while colors show the mission’s elevation measurements. Colors range from blue at the lowest elevations to brown and white at the highest elevations.

False-color image of the Kunlun Fault