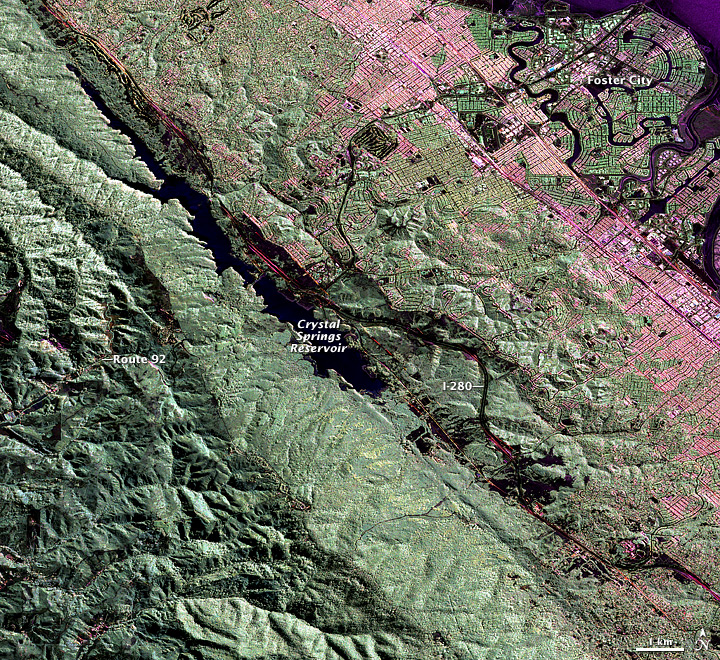 Earth’s crust is a collection of fractured plates that shift across the planet’s surface over millions of years. Two of the major plates meet at the coast of California; the Pacific Plate, under the ocean, is drifting slowly northwest, grinding along the margin of the North American Plate, to the east. Where they meet, the intense pressure of the collision creates an 800-mile-long fracture zone called the San Andreas Fault.

Much of the length of the fault is lined by a distinct trough. This false-color NASA radar image shows a section of the fault west of San Francisco Bay; the Crystal Springs Reservoir fills the trough that marks the underlying fault. The black line curving along the east side of the fault is I-280, and California highway 92 runs from the top right across to the center left of the image, heading towards Half Moon Bay to the west. San Mateo and Burlingame are parts of the large urbanized area in various tones of pink and green, and Foster City is the area of curved streets extending out into the San Francisco Bay at the top right.

The image was captured in November 2008 as part of a campaign to repeatedly collect detailed, three-dimensional images of the San Andreas Fault along the same flight path. The goal is to map which parts of the fault are creeping past each other with little “stickiness,” and which parts appear to be locked together—places where pent-up stress may be released suddenly in a major earthquake. By repeatedly collecting images over an identical flight track, scientists can spot places where the topography is visibly deformed. Ground deformation—sometimes just a fraction of inch—can indicate that far below the surface, the plates are stuck together.

To read more about NASA’s mission to map the San Andreas and related faults with radar imagery, please read Scientists Search for a Pulse in Skies Above Earthquake Country.