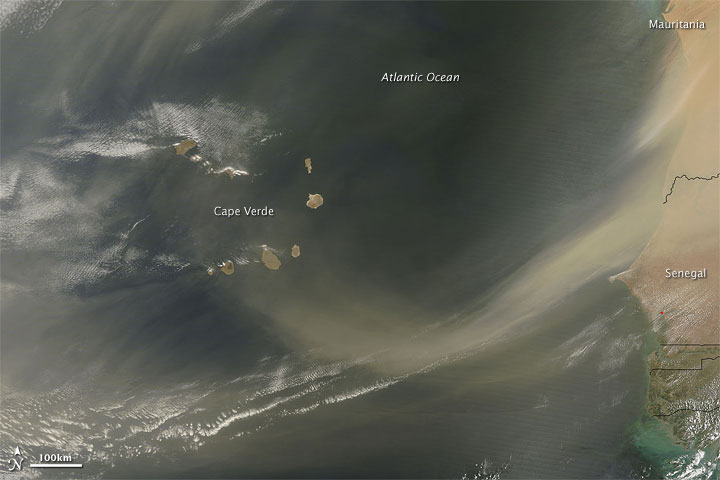 Saharan sand blew off the coasts of Mauritania and Senegal on June 22, 2009. The Moderate Resolution Imaging Spectroradiometer (MODIS) on NASA’s Terra satellite took this natural-color picture the same day. Two dust plumes blow toward the southwest, one plume stretching possibly 150 kilometers (95 miles) off the coast, and the other plume forming an arc that reaches all the way to Cape Verde. Thinner but larger plumes of dust hover over the Atlantic west and north of the island archipelago.

Although this image shows dust immediately off the coast of West Africa, a layer of dust from storms such as this often travels virtually intact to the other side of the Atlantic. This layer of dry, hot, dusty air is called the Saharan Air Layer.

The Sahara experiences extreme variations in land surface temperature—from freezing temperatures at night to more than 54.4°C (130°F) during the day. The extreme daytime heating in the Sahara Desert, especially during the summer, causes instability in the lowest level of the atmosphere. Dust-laden air rises and begins moving westward. As the air travels—a trip that often takes several days—it continues heating. When this Saharan Air Layer moves off the African coast and over the Atlantic Ocean, it is undercut by a cooler, wetter layer of air. Air normally cools with altitude, but the Saharan Air Layer passing over cooler air currents causes a temperature inversion, which suppresses mixing. As a result, Saharan dust often travels across the Atlantic, sometimes remaining visible throughout the trip.

The dust is a mixed blessing in the Western Hemisphere, alternately causing respiratory illness and coral bleaching, and yet providing soil to Caribbean islands and the Amazon Rainforest.

Saharan sand blew off the coasts of Mauritania and Senegal on June 22, 2009.