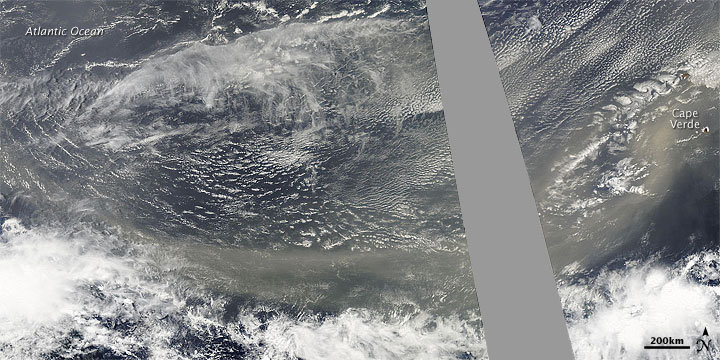 Saharan dust crossed the Atlantic Ocean on June 24, 2009. The Moderate Resolution Imaging Spectroradiometer (MODIS) on NASA’s Aqua satellite observed the dust in two overpasses. The right third of this picture shows the image acquired in the first overpass at 14:50-14:55 UTC. The left two-thirds of this picture show the image acquired in the second overpass at 16:25-16:30 UTC. The dust remains discernible over a thousand kilometers west of Cape Verde. The gray stripe is where the satellite acquired no data.

Saharan dust often travels across the Atlantic thanks to a hot, dry, dusty layer of air known as the Saharan Air Layer. Extreme daytime heating of the Sahara creates instability in the lowest layer of the atmosphere, lofting dust particles into the air. The dust-laden air layer continues warming as it travels westward across the Sahara. As the Saharan Air Layer moves off the west coast of Africa, it passes over a cooler, wetter layer of air. This temperature inversion (air usually cools with altitude) prevents mixing, enabling dust to travel across the ocean intact. Across the Atlantic, dust brings problems and benefits: respiratory illness and coral bleaching, but also rich soils.

The high-resolution version of this image has a resolution of 1 kilometer.

Saharan sand blew off the coasts of Mauritania and Senegal on June 22, 2009.