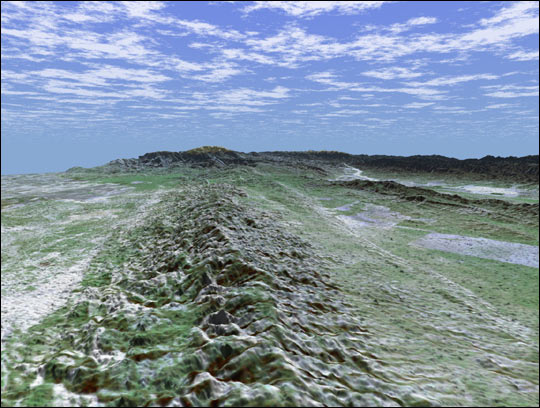 The 1,200-kilometer (800-mile) San Andreas is the longest fault in California and one of the longest in North America. This perspective view of a portion of the fault was generated using data from the Shuttle Radar Topography Mission (SRTM), which flew on NASA's Space Shuttle last February, and an enhanced, true- color Landsat satellite image. The view shown looks southeast along the San Andreas where it cuts along the base of the mountains in the Temblor Range near Bakersfield. The fault is the distinctively linear feature to the right of the mountains. To the left of the range is a portion of the agriculturally rich San Joaquin Valley. In the background is the snow-capped peak of Mt. Pinos at an elevation of 2,692 meters (8,831 feet). The complex topography in the area is some of the most spectacular along the course of the fault. To the right of the fault is the famous Carrizo Plain. Dry conditions on the plain have helped preserve the surface trace of the fault, which is scrutinized by both amateur and professional geologists. In 1857, one of the largest earthquakes ever recorded in the United States occurred just north of the Carrizo Plain. With an estimated magnitude of 8.0, the quake severely shook buildings in Los Angeles, caused significant surface rupture along a 350-kilometer (220-mile) segment of the fault, and was felt as far away as Las Vegas, Nevada. This portion of the San Andreas is an important area of study for seismologists. For visualization purposes, topographic heights displayed in this image are exaggerated two times.

The elevation data used in this image was acquired by SRTM aboard the Space Shuttle Endeavour, launched on February 11, 2000. SRTM used the same radar instrument that comprised the Spaceborne Imaging Radar-C/X-Band Synthetic Aperture Radar (SIR-C/X-SAR) that flew twice on Endeavour in 1994. SRTM was designed to collect three-dimensional measurements of Earth's land surface. To collect the 3-D SRTM data, engineers added a mast 60 meters (about 200 feet) long, installed additional C-band and X-band antennas, and improved tracking and navigation devices.