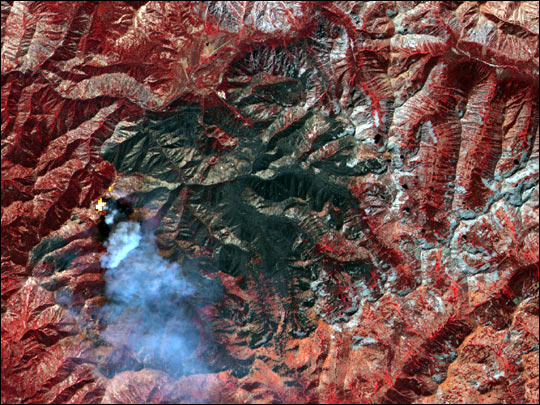 This image shows the Clear Creek fire in Idaho on the morning of August 30, 2000, as seen by the Advanced Spaceborne Thermal Emission and Reflection Radiometer (ASTER), flying aboard NASA’s Terra spacecraft. The United States Forest Service first detected the Clear Creek fire on July 10, 2000, and deployed a handful of firefighters and a helicopter to fight the fire. By the end of the day, the fire had consumed 12 hectares (30 acres) of forest. Later in July, strong winds caused the fire to jump firebreaks, increasing the burned area from 21,260 hectares (52,500 acres) on the 26th to 24,300 hectares (60,000 acres) on the 27th. On August 30, 1787 people, 16 helicopters, 47 fire engines, and 20 bulldozers were fighting the fire, which had consumed 80,990 hectares (199,973 acres). In the following days, rain and cool temperatures slowed the growth of the fire. Although the fire stopped spreading in the first week of September, it was not declared contained until October 14th, having burned 83,580 hectares (206,379 acres).

Image by Robert Simmon, based on data from NASA/GSFC/MITI/ERSDAC/JAROS, and U.S./Japan ASTER Science Team