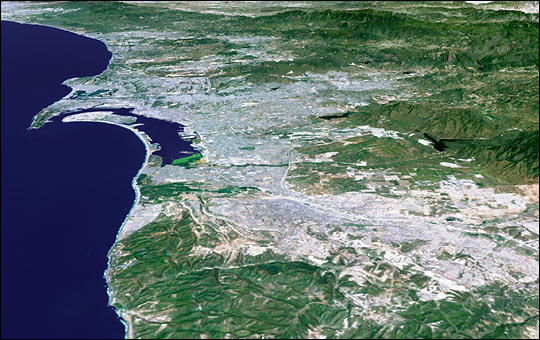 The influence of topography on the growth of the city of San Diego is seen clearly in this computer-generated perspective viewed from the south. The Peninsular Ranges to the east of the city have channeled development of the cities of La Mesa and El Cajon, which can be seen just above the center of the image. San Diego itself clusters around the bay enclosed by Point Loma and Coronado Island. In the mountains to the right, Lower Otay Lake and Sweetwater Reservoir show up as dark patches.

Landsat has been providing visible and infrared views of the Earth since 1972. SRTM elevation data matches the 30-meter (98-foot) resolution of most Landsat images and will substantially help in analyzing the large and growing Landsat image archive.

Elevation data used in this image was acquired by the Shuttle Radar Topography Mission (SRTM) aboard the Space Shuttle Endeavour, launched on Feb. 11, 2000. SRTM used the same radar instrument that comprised the Spaceborne Imaging Radar-C/X-Band Synthetic Aperture Radar (SIR-C/X-SAR) that flew twice on the Space Shuttle Endeavour in 1994. SRTM was designed to collect 3-D measurements of the Earth’s surface. To collect the 3-D data, engineers added a 60-meter (approximately 200-foot) mast, installed additional C-band and X-band antennas, and improved tracking and navigation devices.