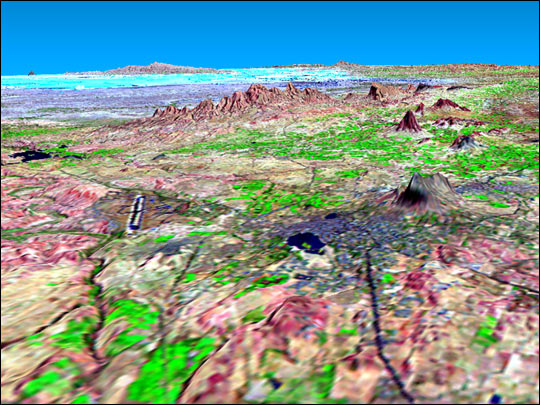 This perspective view shows the city of Bhuj, India, in the foreground (gray area). Bhuj and many other nearby towns and cities were almost completely destroyed by the shaking of an earthquake in western India on January 26, 2001. This magnitude 7.6 earthquake was the deadliest in the history of India with some 20,000 fatalities and over a million homes damaged or destroyed. The epicenter of the earthquake was in the area in the background of this view.

Bhuj was the historical capital of the Kachchh region, and the Bhuj airport is the prominent dark line with light borders to the left of the center of the image. Highways and rivers appear as dark lines. Vegetation appears bright green in this false-color Landsat image. The Gulf of Kachchh (or Kutch) is the dark blue area in the upper right corner of the image. The hills reach up to 500 meters (1,500 feet) elevation. The light blue area in the background center of the image is low-lying salt flats called the Rann of Kachchh.

Landsat has been providing visible and infrared views of the Earth since 1972. SRTM elevation data matches the 30-meter resolution of most Landsat images and will substantially help in analyses of the large and growing Landsat image archive.

Elevation data used in this image was acquired by the Shuttle Radar Topography Mission (SRTM) aboard the Space Shuttle Endeavour, launched on February 11, 2000. SRTM used the same radar instrument that comprised the Spaceborne Imaging Radar-C/X-Band Synthetic Aperture Radar (SIR-C/X-SAR) that flew twice on the Space Shuttle Endeavour in 1994. SRTM was designed to collect three-dimensional measurements of the Earth's surface. To collect the 3-D data, engineers added a 60-meter-long (200-foot) mast, installed additional C-band and X-band antennas, and improved tracking and navigation devices. The mission is a cooperative project between the National Aeronautics and Space Administration (NASA), the National Imagery and Mapping Agency (NIMA) of the U.S. Department of Defense (DoD), and the German and Italian space agencies.