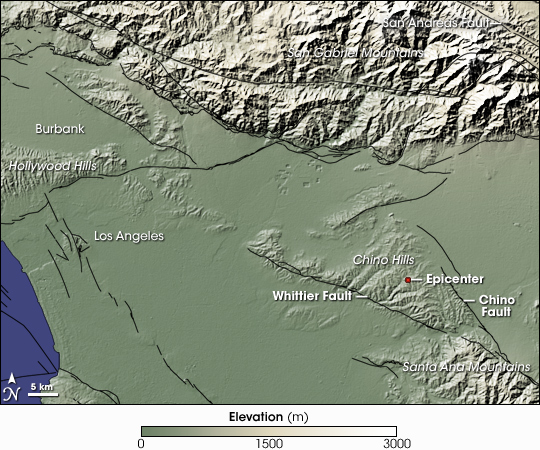 On Tuesday, July 29, 2008, at 11:42 a.m. Pacific Daylight Time, a magnitude 5.4 earthquake rumbled the East Los Angeles area of California. The epicenter of the quake was about 9 miles beneath the Chino Hills. According to reports from the U.S. Geological Survey (USGS), the quake and several aftershocks caused strong shaking from the Chino Basin in the north to the Los Angeles basin in the southwest. Some shaking was felt as far away as Las Vegas, Nevada, and Yuma, Arizona.

The image above shows the topography of the area combined with locations of fault lines (black lines). The elevation information comes from the Shuttle Radar Topography Mission, a radar system that flew onboard the Space Shuttle Endeavour during an 11-day mission in February 2000. Low elevations are in shades of green, while higher elevations are tan and white.

Many of the faults in California are strike-slip faults, locations where two blocks of Earth’s crust grind past each other. Where the rocks in the crust are weak, they crack; the pieces slip past each other. The July 29 earthquake in the Chino Hills occurred in a wedge between two faults, the Whittier Fault and the Chino Fault, both of which are strike-slip faults. However, preliminary data on the recent quake suggests that in addition to slip, there was also some thrusting (“up and over” motion). As of their July 29 report, the scientists at the USGS had not concluded which fault was responsible for the recent quake.

The Whittier and Chino faults are part of a larger network of faults created as the north edge of the crustal block underlying the Santa Ana Mountains (and other ranges in the area, collectively called the Peninsular Ranges) collides with the San Gabriel Mountains to the north.

Northwest-southeast-trending mountains and wide basins dominate the topography between the Gulf of California and the Mexico-United States border where a major earthquake occurred on April 4, 2010.