Floods in the Wake of Hurricane Dolly 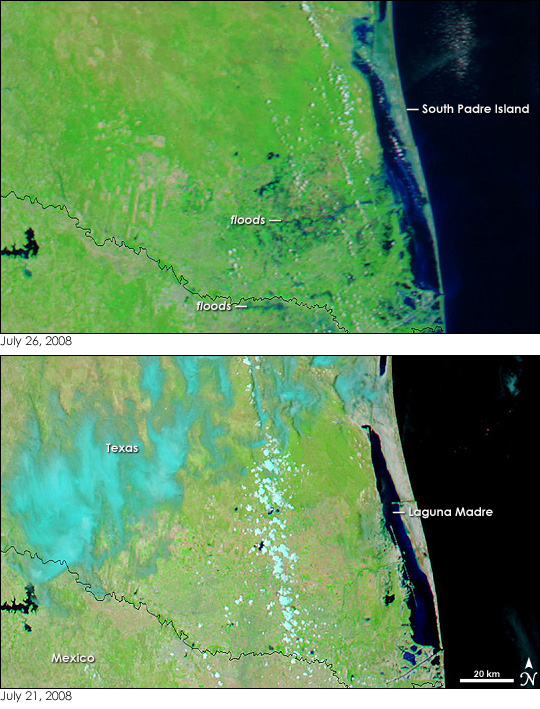 Coastlines can either evolve slowly, as a beach builds or erodes wave by wave, or they can change all at once in one mighty storm. Barrier islands are particularly prone to sudden change because they take the brunt of severe storms. Even the relatively mild Hurricane Dolly, which came ashore on July 23 as a Category 2 hurricane with winds of about 160 kilometers per hour (100 miles per hour), brought noticeable changes to the Texas coastline. The Moderate Resolution Imaging Spectroradiometer (MODIS) flying on NASA’s Aqua satellite captured the top image on July 26, 2008, immediately after Dolly moved out of the region. The lower image was taken on July 21, a few days before the storm came ashore.

The images show changes to both South Padre Island and the Texas shoreline. Both images were made with a combination of visible and infrared light to highlight the presence of water on the ground. The plant-covered land is green, while sparsely vegetated areas are tan. Water is dark blue to black, and clouds are turquoise blue and white. South Padre Island appears to be painted with a film of pale blue in the top image. The color is from water-soaked sand. A closer look reveals more significant changes. The shape of the inland side of the island has changed. The Laguna Madre appears to have swollen, covering much of the western shore of South Padre Island. Just below the center of the image, a square-shaped section of the island is gone.

The Texas coastline also changed. The thin line of land that ran through the Laguna Madre on July 21 is missing in the July 26 image. Water intrudes into shore where low-lying coastal regions have flooded. The waters of the Laguna itself are bright blue. Soil and sand that washed into the Laguna from the storm and floods reflect light back into space, and they color the water lighter blue.

Dolly’s heavy rains also caused inland flooding on both sides of the border between the United States and Mexico. Rivers and streams too small to be visible on July 21 stand out as a network of blue on July 26.

Hurricane Dolly caused flooding in southernmost Texas when it came ashore over the southern end of South Padre Island and Laguna Madre on July 23, 2008. This pair of false-color images of the area from the Advanced Spaceborne Thermal Emission and Reflection Radiometer (ASTER) on NASA’s Terra satellite is a before-and-after comparison of the area northeast of the town of Rio Hondo, Texas.