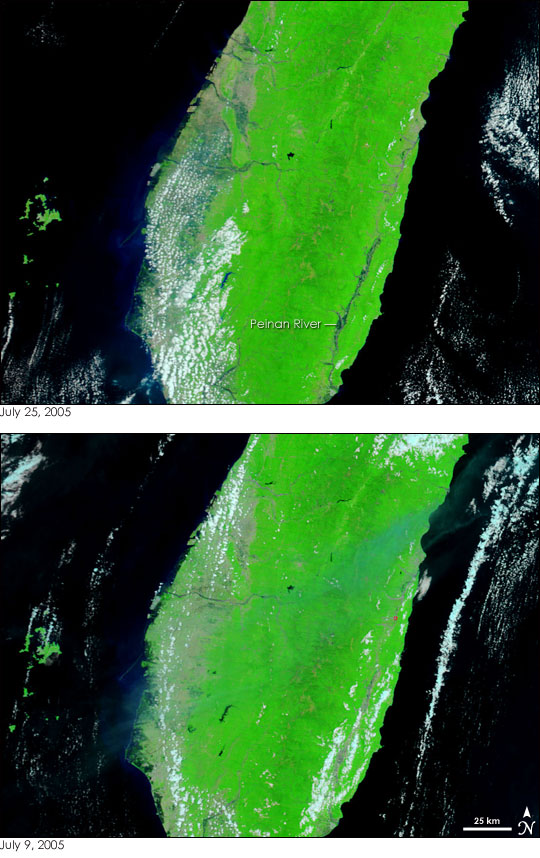 Typhoon Haitang swept across Taiwan between July 18 and July 20, 2005, pounding the island with rain. During the storm, flood waters inundated much of southern Taiwan, damaging bridges and destroying crops. On July 25, a week after the storm first started to affect Taiwan, flooding was still evident when the Moderate Resolution Imaging Spectroradiometer (MODIS) on NASA’s Terra satellite captured the top image. The lower image was taken on July 9, a little over a week before the storm hit the island.

Flooding is visible in two places in the top image. First, the Peinan River of southeastern Taiwan is much larger than it was a few weeks earlier. On the west side of the island, several rivers are similarly swollen, and blue flood water covers what was dry, bare ground on July 9. Though water is normally black in this false-color combination, dirt colors the water blue, so the sediment-laden flood water on the island itself is blue. Vegetation is a brilliant green, bare land is pinkish tan, and clouds are white and pale blue.

Typhoon Haitang and its associated floods killed 12 and caused millions of dollars of damage, according to local media reports.

Daily images of Taiwan are available from the MODIS Rapid Response Team.