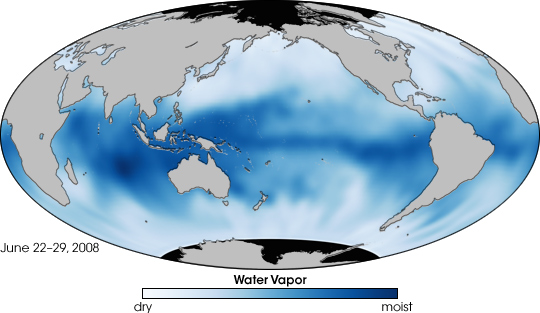 In mid-June 2008, NASA launched the latest of a series of satellites that scientists use to measure sea level from space. The Ocean Surface Topography Mission (OSTM)/Jason-2 uses a radar altimeter to map the height of the ocean surface. The radar sends a pulse of energy down to the ocean surface and listens for the echo. The time delay and intensity of the echo reveal the altitude of the sea surface.

Because water vapor delays the time it takes for the radar pulse to travel to the ocean surface and back, the satellite also carries a sensor to measure atmospheric moisture. The image above shows the first results from this sensor, the Advanced Microwave Radiometer: a global map of the amount of water vapor in the atmosphere beneath the satellite from June 22–28, 2008. The time span was the first week of operations for OSTM’s science instruments. In this image, white and light blue show dry areas; dark blue shows moist regions.

In moist regions, such as over the Indian and tropical Pacific Oceans, the radar signal would have been slowed, exaggerating the time delay and making the sea surface appear lower than it really was. By measuring water vapor, scientists can correct for its influence on the radar echo. Like the altimeter, the radiometer looks straight down at the ocean surface. It senses three microwave wavelengths: the thermal signatures emitted by water vapor, clouds, and the ocean surface when it is roughed up by wind. The measurements at these three wavelengths are used together to derive the total amount of water vapor present in the atmosphere in the altimeter’s line of sight.

OSTM/Jason-2 is flying in the same orbit as its predecessor, Jason-1, but 55 seconds behind. This positioning allows mission personnel to compare nearly simultaneous measurements of the new and old satellites to make sure the new one is working as expected. A comparison of this map with the measurements made by the sensors on Jason-1 shows good agreement: the new sensor is working well. When its calibration and validation period is complete, OSTM/Jason-2 will remain in the orbit now occupied by Jason-1 and will continue the long-term record of ocean surface topography begun by Topex/Poseidon in 1992 and carried on by Jason-1. Jason-1 will be moved to a new orbit beside OSTM/Jason-2 to provide additional measurements of ocean surface topography for as long as the older spacecraft remains healthy.

OSTM/Jason-2 is a collaboration between NASA’s Jet Propulsion Laboratory; the National Oceanic and Atmospheric Administration (NOAA); the French space agency, CNES; and the European Organisation for the Exploitation of Meteorological Satellites (EUMETSAT).

NASA map by Jesse Allen, based on data provided by Shannon Brown, NASA JPL. Caption by Rebecca Lindsey, adapted from an image release from NASA JPL.