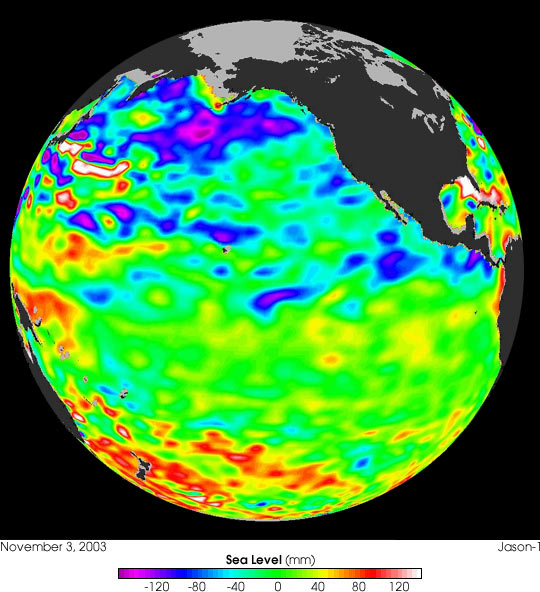 Some climate forecast models indicate there is an above average chance that there could be a weak to borderline El Niño by the end of November 2003. However, the trade winds, blowing from east to west across the equatorial Pacific Ocean, remain strong. Thus, many scientists doubt that the warm temperature anomaly will form again this year. The latest remote sensing data from NASA’s Jason-1 satellite show normal conditions across the equatorial Pacific. There are currently no visible signs of an impending El Niño.

The image above is a global map of sea surface height, accurate to within 30 millimeters. The image represents data collected and composited over a 10-day period, ending on Nov. 3, 2003. The height of the water relates to the temperature of the water. As the ocean warms, its level rises; and as it cools, its level falls. Yellow and red areas indicate where the waters are relatively warmer and have expanded above sea level, green indicates sea level, and blue and purple areas show where the waters are relatively colder and the surface is lower than sea level.

The Jason-1 satellite carries a dual-frequency radar altimeter. This instrument beams microwave pulses—at 13.6 and 5.3 Gigahertz, respectively—downward toward the Earth. To determine the ocean’s height, the instrument precisely measures the time it takes for the microwave pulses to bounce off the surface and return to the spacecraft. This measure, multiplied by the speed of light, gives the range from the satellite to the ocean’s surface. (For more details, visit the Jason-1 Web site.)