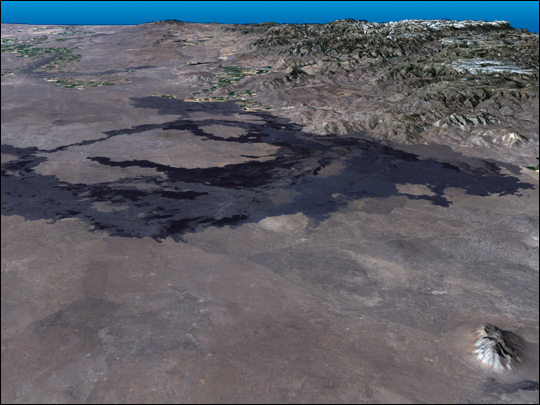 An intrusion of black, contorted rocks spills over the Snake River Plain in southeastern Idaho, smothering the desert sagebrush and halting the encroaching farms. The occasional Juniper tree, scraggy and tenacious, clings to the uneven mounds of cooled lava, while tiny patches of small wildflowers find root in the loose soil the wind drops in crags in the landscape. The unearthly landscape appears so foreign and grim that the place has been saddled with the name “Craters of the Moon.” Indeed, NASA sent three Apollo astronauts to train for lunar exploration on the desolate flow. It is a fortunate appellation—a similar, though less forbidding flow to the east earned the title “Hell’s Half-Acre.”

The Craters of the Moon is a crescent-shaped lava field nestled against the foothills of the Pioneer Mountain Range in southern Idaho. President Coolidge established the Craters of the Moon National Monument in the northern section of the field (the top of the crescent) on May 2, 1924, and President Clinton expanded it on November 9, 2000. Covering 618 square miles, Craters is the largest young basaltic lava field in the conterminous United States. Stretches of jagged rocks, black, glistening rope-like folds of pahoehoe, and large, uneven squares of blocky pahoehoe are at once beautiful and daunting. Cinder cones and spatter cones rise above the sea of strangely shaped black rocks. Lava tubes tunnel beneath the surface, providing a labyrinth of linked caves.

The Craters of the Moon and other lava flows in southern Idaho poured out of the Great Rift, a volcanic zone of cracks in the Earth’s crust that runs approximately 62 miles from the northwest corner of the Snake River Plain to the southeast. Its course is marked by cinder cones, lava cones, eruptive fissures, and shield volcanoes. The Great Rift was not violently explosive; rather, it quietly laid down thick blankets of molten rock. The Craters of the Moon is made up of over 60 different lava flows, the most recent of which is about 2,100 years old, and the oldest of which is 15,000 years old. Based on the geologic history of the region, another eruption is due within the next 1,000 years, perhaps as soon as 200 years from now.

This true-color Landsat 7 image was taken on August 14, 2000. To the northeast of the Craters of the Moon, in the lower right corner of the image, the Big Southern Butte rises out of the desert. At 2,500 feet, the large volcanic dome served as a prominent landmark for pioneers traveling through the Snake River Plain on the Oregon Trail. A green and gold ribbon of agricultural fields snakes away from the lava flow in the top left corner of the image, while the Pioneer Mountain Range is gathered in the upper right corner.