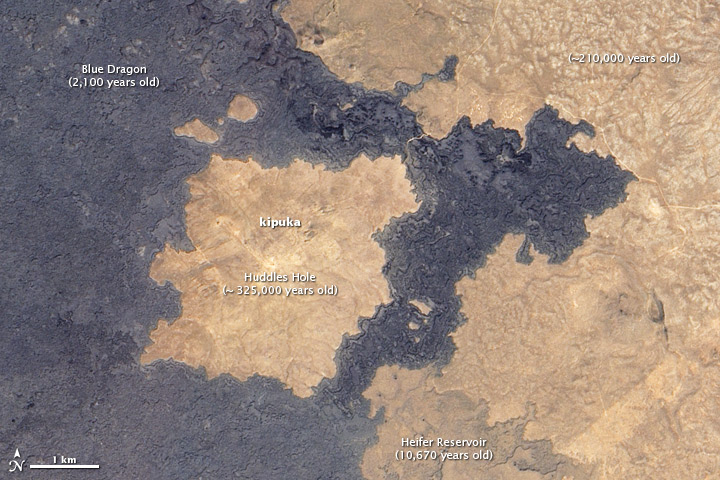 Craters of the Moon lava field is an accumulation of geologically young lava flows (some only 2,100 years old) spreading over the Snake River Plain. Weathering of the lava flows in arid southeastern Idaho is very slow, so the flows appear similar to when they were first erupted. The bare lava appears dark gray and black in this natural-color satellite image. The brown region encircled by lava is a kipuka, a region of high ground spared from the encroaching lava. Carey Kipuka, to the west of this image, preserves some of the only remaining natural grassland in the Snake River Plain. Most of the other grasslands in the area, including Huddles Hole (shown here), have been changed by grazing and other agriculture.

The entire Snake River Plain is underlain by old lava flows similar to those at Craters of the Moon. Instead of being exposed, the older flows are covered by loess, soil composed of wind-driven silt. The loess accumulated during the last ice age, which ended about 10,000 years ago. Along the southern edge of this scene the 11,000-year old Heifer Reservoir flow is covered with only 5 centimeters (2 inches) of wind-blown sand. Older flows in the area are covered by up to 2 meters (6.6 feet) of sand, volcanic ash, and loess. Where the soil is thick enough, sagebrush grows. Newer flows support only scattered tufts of grass or an occasional tree.

This image was acquired on September 16, 2009, by the Advanced Land Imager aboard the Earth Observing-1 (EO-1) satellite. It has a spatial resolution (level of detail) of ten meters per pixel.