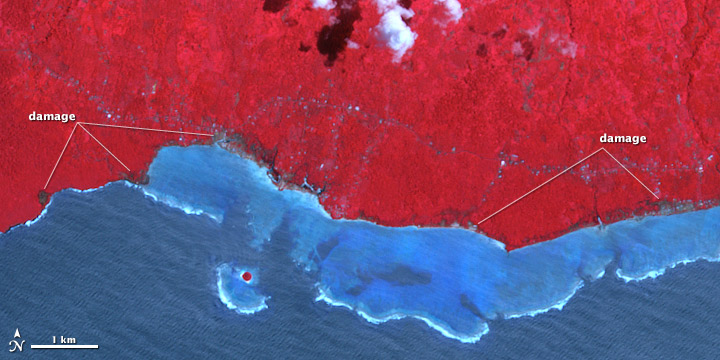 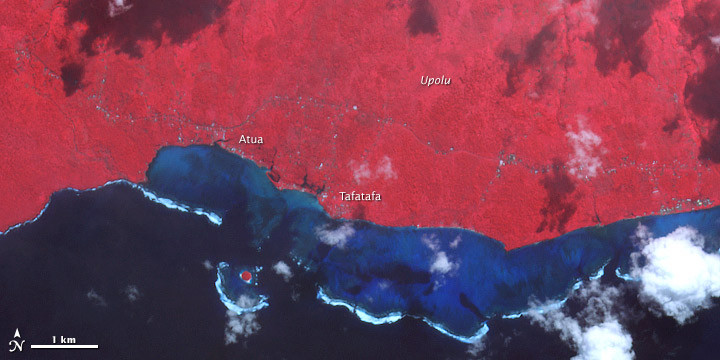 On September 29, 2009, a tsunami struck the southern shoreline of Upolu, the easternmost of the Samoan islands. The tsunami killed nearly 200 people in Samoa, American Samoa, and Tonga, according to Reuters. These false-color satellite images show damage to vegetation on Upolu’s coast. The top image shows the area after the tsunami, and the bottom image shows the same area five years earlier. Water is blue; buildings, clouds, and breaking waves are white; healthy vegetation is bright red, while damaged regions are dark gray. The most obvious differences between the two images occur in small patches along the coastline. The damaged area appears to extend up to 330 meters (1,100 feet) inland. Multiple buildings were severely damaged or destroyed in the village of Atua, and there was coastal erosion and road damage near Tafatafa, according to the U.N. Operational Satellite Applications Programme.

These images were acquired by the Advanced Spaceborne Thermal Emission and Reflection Radiometer (ASTER) aboard NASA’s Terra satellite on October 10, 2009, (top) and June 10, 2004 (bottom).