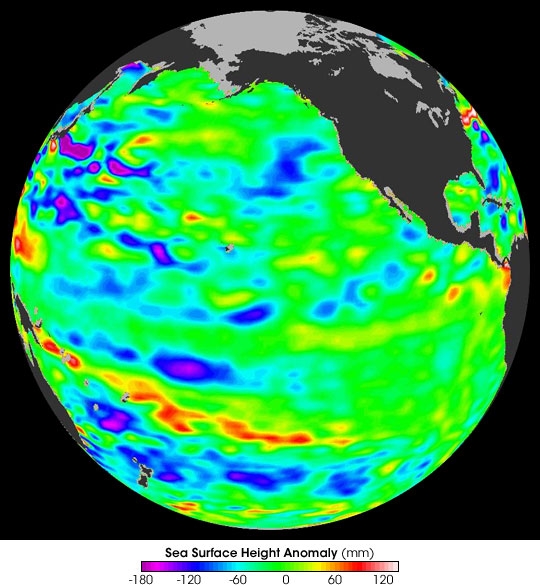 In early 2006, a weak La Niña event kept the temperatures in the Pacific Ocean along the equator a little cooler than normal. Atlantic Ocean hurricane forecasters were keeping an eye on the Pacific because La Niña events and the large-scale atmospheric changes that often go along with them can have a long-distance effect on hurricane formation in the Atlantic Ocean. But by April 2006, the La Niña had all but faded. The latest remote-sensing data from the NASA/French Jason satellite show near-normal conditions across the equatorial Pacific Ocean.

This image shows Jason observations of sea surface height collected over a 10-day period centered on May 21, 2006. The height of the water relates to the temperature of the water, an indicator of the changing amount of heat stored in the ocean. As the ocean warms, its level rises; as it cools, its level falls. Yellow and red areas indicate where the waters are relatively warmer and have expanded above normal sea level. Green areas, which dominate the image, indicate near-normal sea level. Blue and purple areas show where the waters are relatively colder, and the sea level is lower than normal.

The Jason satellite carries a dual-frequency radar altimeter. This instrument beams microwave pulses downward toward the Earth at frequencies of 13.6 and 5.3 Gigahertz. To determine the ocean’s height, the instrument precisely measures the time it takes for the microwave pulses to bounce off the surface and return to the spacecraft. This measure, multiplied by the speed of light, gives the range from the satellite to the ocean surface.

The Jason mission is a collaboration between the United States and France, managed jointly by NASA’s Jet Propulsion Laboratory and the Centre National d&#8217Etudes Spatiales (CNES). NASA’s research on Earth’s oceans using Jason and other space-based capabilities is conducted as a part of its Science Mission Directorate, to better understand and protect our home planet.