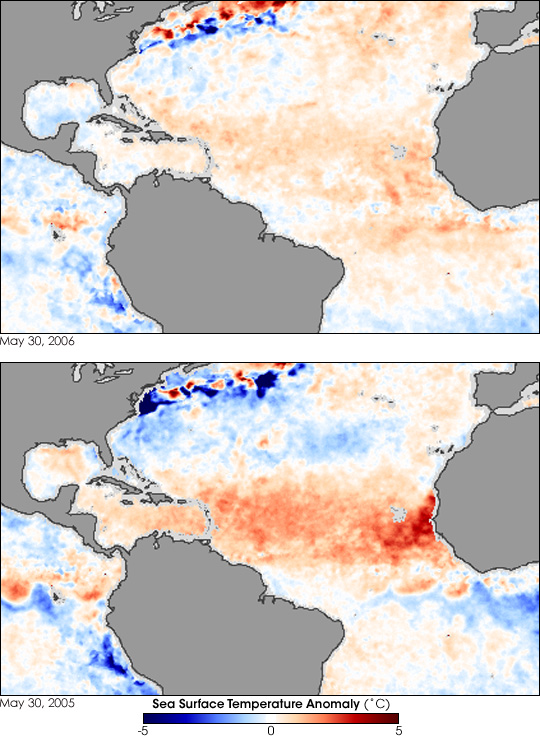 June 1 marks the first official day of hurricane season in the Atlantic Ocean. In 2006, conditions in the Atlantic were “hurricane friendly,” said NASA scientist David Adamec, and not quite as extreme as they had been at the opening of the 2005 hurricane season. Hurricanes need both warm sea surface temperatures and calm winds to develop. Warm water provides both heat and humidity needed for storm formation. Strong winds would tear a developing storm apart, while calm winds allow a hurricane to build. In late May 2006, sea surface temperatures were warmer than normal, and winds were calm.

These images contrast sea surface temperatures on May 30, 2006, top, and May 30, 2005, bottom, as measured by the Advanced Microwave Scanning Radiometer-EOS (AMSR-E) on NASA’s Aqua satellite. Red colors show regions where waters were warmer than the twelve-year average (1985-1997), while blue indicates cooler-than-average temperatures. White indicates average temperatures. In 2006, temperatures in the Atlantic were slightly warmer than average, particularly in the Caribbean, but strong southwest trade winds stirred the Gulf of Mexico, keeping the surface waters cool, said Adamec. In 2005, by contrast, the entire hurricane-prone section of the Atlantic was much warmer than average. In fact, at the opening of the 2006 hurricane season, sea surface temperatures were 2 degrees cooler than they had been at opening of the 2005 season, said Adamec. The warm temperatures in 2005 allowed a record seven storms to form by the end of July, one of which, Hurricane Emily, set records when it became the first category 5 hurricane to occur in July. All other Atlantic storms of that strength have developed later in the season.

Though sea surface temperatures were not as extreme at the opening of the 2006 hurricane season as they were in 2005, the National Hurricane Center predicts a very active hurricane season with 13 to 16 named storms, 4 to 6 of which could become major hurricanes.