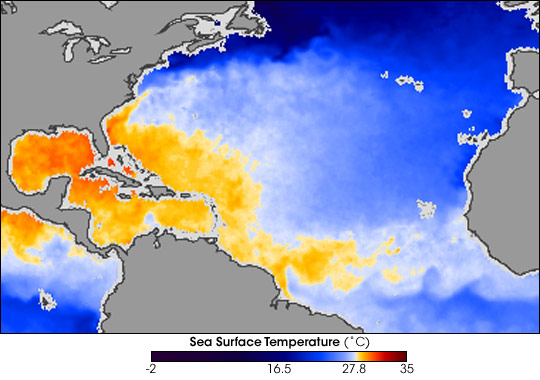 Hurricanes need two basic ingredients to develop: warm, moist air and a relatively calm atmosphere. Late summer over the Atlantic Ocean provides both things. Ocean waters above about 27 degrees Celsius (80 Fahrenheit) give rise to the warm, moist air that fuels tropical storms, and winds that could tear a storm apart are light during the summer. Typically, the Atlantic is primed for hurricanes by early August, and the height of the hurricane season comes in September, though the official hurricane season runs from June 1 through November 30.

This image shows sea surface temperatures in the Atlantic Ocean and the Gulf of Mexico on July 26, 2007. Water that is warm enough to fuel hurricanes is yellow, orange, and red, while water that is too cool to sustain a hurricane is blue. The relatively shallow Gulf of Mexico and the Caribbean were warm and hurricane-ready. Hurricane Alley, the warm swath of water between Africa and the northern tip of South America where hurricanes frequently form, was just beginning to heat up. The image was made from data collected by the Advanced Microwave Scanning Radiometer (AMSR-E) flying on NASA’s Aqua satellite.

Most forecasts called for an active hurricane season in 2007, but some forecasters toned down their forecasts in late July because sea surface temperatures remained cool, reported Reuters. One reason for the ocean’s surface being cooler than anticipated may be that a series of Saharan dust storms shaded the water’s surface, says Weather Underground meteorologist Jeff Masters. Scientists from the National Oceanic and Atmospheric Administration (NOAA) warned however, that 2007 could still produce an active hurricane season, Reuters added. The most active months—August, September, and October— are still to come.