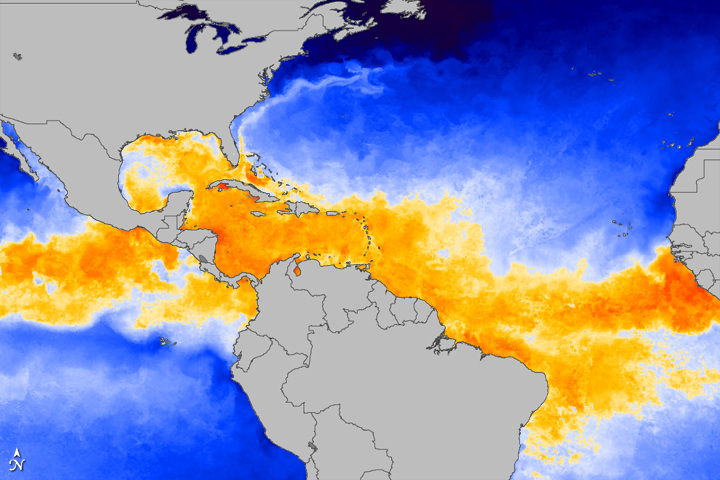 Atlantic hurricane season begins on June 1 and lasts for six months. On May 27, 2010, the U.S. National Oceanic and Atmospheric Administration (NOAA) forecast an “active to extremely active” hurricane season for 2010. NOAA projected a 70 percent probability for 14 to 23 named storms, 8 to 14 hurricanes, and 3 to 7 major hurricanes.

Among the necessary ingredients for hurricanes is sufficiently warm ocean temperatures, typically above approximately 28 degrees Celsius (about 82 degrees Fahrenheit). This color-coded image from Japan’s Advanced Microwave Scanning Radiometer for EOS (AMSR-E) flying on NASA’s Aqua satellite shows sea surface temperatures across the equatorial Atlantic Ocean and part of the Pacific Ocean at the beginning of the 2010 season. Waters that are warm enough to promote hurricane formation appear in shades of yellow to orange-red. Waters too cool to foster hurricane formation appear in shades of blue.

A band of warm water extends from the west coast of Africa across the Atlantic Ocean and Central America, and over the eastern Pacific Ocean. Sea surface temperatures are especially warm near the coasts of southern Senegal, Guinea, and Sierra Leone. In the west, pockets of very warm water also appear off Cuba, Honduras, and Nicaragua.

Amid the warm waters surrounding Central America, however, meandering trails of cool water appear. Just as hurricanes feed on warm sea surface waters, the storms also churn up cooler waters from depth as they pass over the ocean surface. The cool waters around Central America may be the wake left by Tropical Storm Agatha, which caused deadly floods and landslides in late May 2010.

The Earth Observatory has received questions about how the Gulf of Mexico oil slick might affect hurricanes and vice versa. For more information on this topic, please read the National Oceanic and Atmospheric Administration’s factsheet, Hurricanes and the Oil Spill (PDF format).