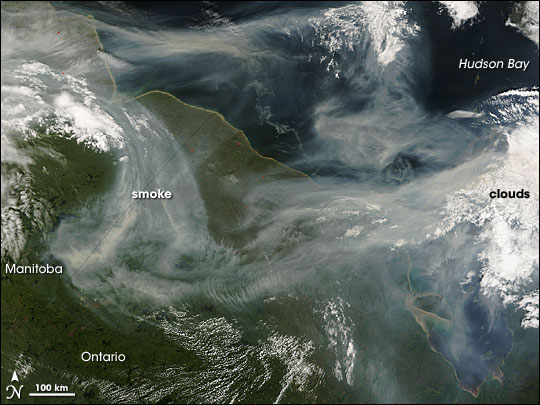 Thick smoke choked the skies over Manitoba, Ontario, and Hudson Bay on Tuesday, July 24, 2007. The Moderate Resolution Imaging Spectroradiometer (MODIS) flying on NASA’s Terra satellite took this picture the same day. In this image, thick swaths of smoke hundreds of kilometers across stretch eastward over Canada’s land and water. In the south, a smoke plume arcs in a clockwise direction toward the southwest before changing direction and heading east. The smoke can be distinguished from the nearby clouds by the difference in color. Whereas clouds are bright white, the smoke is dingy gray.

Besides smoke, this image shows hotspots—areas with anomalously warm surface temperatures detected by the satellite sensor. Hotspots are associated with volcanoes or, in this case, fires. Two fires appear in Ontario, near the coast and the border with Manitoba. These diminutive fires, however, are not responsible for the smoke spreading across the region. The smoke results from a series of wildfires to the west, north of Lake Winnipeg.

According to a news report from the Canadian Broadcasting Corporation, up to 1,000 people in Manitoba were fleeing smoke and fires as of July 25, 2007. Manitoba Conservation officials said some 50 forest fires were burning, nine of them out of control. Hot temperatures, high winds, and lightning strikes all contributed to the situation.

Smoke from wildfires is a regular contributor to air pollution, and NASA satellites have helped researches estimate the extent of that contribution. A 2005 study, for instance, determined that Alaskan wildfires in the summer of 2004 produced as much carbon monoxide as human-related activity throughout the continental United States during the same period, and the carbon monoxide increased ground-level ozone in North America and Europe. See Tracking Nature’s Contribution to Pollution for more information.

Thick smoke choked the skies over Manitoba, Ontario, and Hudson Bay on Tuesday, July 24, 2007. Thick swaths of smoke hundreds of kilometers across stretch eastward over Canada’s land and water. The smoke can be distinguished from the nearby clouds by the difference in color. Whereas clouds are bright white, the smoke is dingy gray.