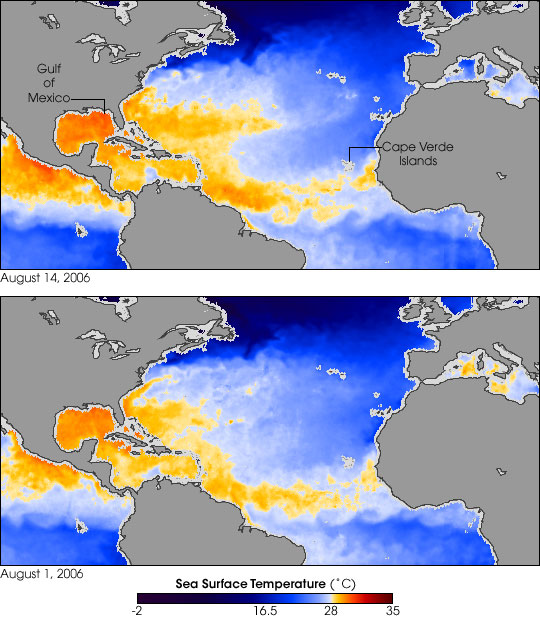 In early August, forecasters at the National Oceanic and Atmospheric Administration (NOAA) revised downward slightly their early-season predictions of the 2006 Atlantic hurricane season. Citing atmospheric and oceanic conditions less conducive to hurricane formation than they initially expected, the National Hurricane Center decreased its predictions of named storms (12-15 instead of 13-16), hurricanes (7-9 instead of 8-10), and major hurricanes (3-4 instead of 4-6). The revised prediction is still above-normal compared to the long-term average.

This pair of images from Japan’s Advanced Microwave Scanning Radiometer for EOS (AMSR-E) flying on NASA’s Aqua satellite shows areas where sea surface temperatures were hurricane-ready on August 14, 2006 (top), and August 1 (bottom). Sea surface temperatures warmer than a threshold of about 28 degrees Celsius (about 82 degrees Fahrenheit) are one of the required ingredients for hurricanes to form. Areas where waters have reached the hurricane-ready threshold are yellow or red in these images, while areas where waters are generally too cool to support hurricanes are blue. Coastal areas where temperatures were not measured are light gray.

The expanse of hurricane-ready water between Africa and the Gulf of Mexico grew over the two-week period. The color of the Gulf of Mexico became a deeper red, as well; any storms steered into the region would find ample warm water to keep them going. According to NOAA, although sea surface temperatures in the tropical Atlantic did not warm as much as originally forecasted, they are nevertheless still above long-term average conditions, which will likely contribute to above-average hurricane activity from August-October.

Among the other factors that NOAA expects to contribute to hurricane activity over the remainder of the 2006 season is a hurricane-favorable configuration of the African easterly jet, a strong easterly (from the east) wind in the middle levels of the atmosphere over West Africa. Waves of turbulence spin off this jet and head westward over the Atlantic; some of these easterly waves spawn hurricanes. Hurricanes that arise from African easterly waves are sometimes called “Cape Verde storms.” In mid-August 2006, NASA, NOAA, university, and international scientists will converge on the Cape Verde Islands to conduct a major field research campaign to study these easterly waves. Using satellites, and ground- and aircraft-based instruments, the scientists will gather data that will help explain why some easterly waves intensify into hurricanes while others do not, as well as how and why the strength, location, and frequency of easterly waves change from year to year. Among the key questions is how dust sweeping over the Atlantic from the Sahara Desert influences hurricane formation.

NASA image by Jesse Allen, based on data from Remote Sensing Systems