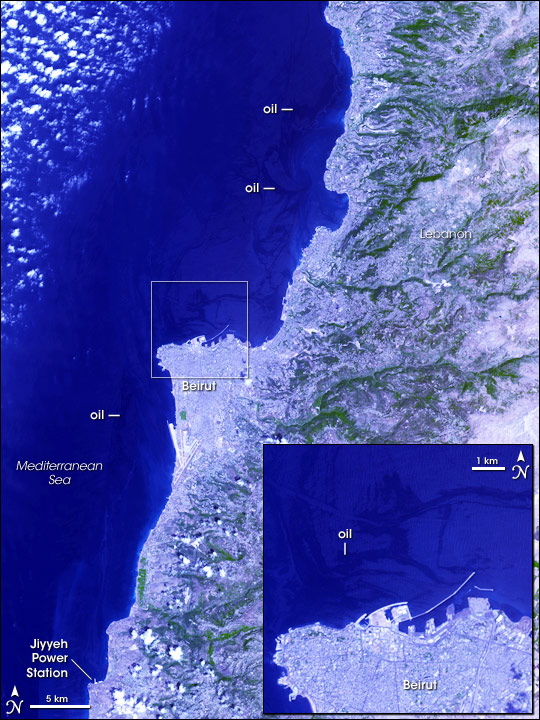 In the summer of 2006, military conflict between Lebanon and Israel led to an oil spill along the coast of Lebanon. Between July 13 and 15, 2006, damage to the Jiyyeh Power Station released thousands of tons of oil along the coast of Lebanon. According to BBC news, early estimates indicated that the oil spill could rival the Exxon Valdez accident in 1989. Covering roughly 120 kilometers (75 miles), the spill was expected to affect fishing and tourism industries, as well as local wildlife. Because cleanup efforts could not safely begin until the hostilities ended, the oil slick continued to spread in the Mediterranean Sea in early August 2006. Representatives from the United Nations, the European Union, and the International Maritime Organization planned to discuss the issue in Greece on August 17, 2006.

The Advanced Spaceborne Thermal Emission and Reflection Radiometer (ASTER) on NASA’s Terra satellite took this picture of the region on August 10, 2006. In this image, the oil slick appears as a slightly darker shade of blue on the ocean surface, and it is easier to see in the enlarged area around Beirut at lower right. The slick spreads from the power plant at the southern end of the image to well north of the city of Beirut. The oil initially moved away from the coast, but some officials feared that it might return to the shoreline. The intensely urbanized area of Beirut appears in shades of gray, with straight lines and sharp angles marking the city’s features. In contrast, patches of green appear along Lebanon’s rough terrain to the east.

Oil slicks are not always easily visible in satellite imagery from passive sensors like radiometers, which observe reflected sunlight. The ocean is already a dark surface in the imagery from those sensors, and the oil may only change the color slightly if at all. More often, oil slicks are observed with active sensors like radars, which send out pulses of energy and measure the returned signal. However, at the time of this image, the area of the slick was in a part of the ASTER scene where the ocean surface appeared very bright. Generally, the rougher the water surface, the brighter the ocean will appear, and because oil smoothes the water’s surface, places where the oil has spread appear darker in this image.

Oil spilled from the Jiyyeh Power Plant in Lebanon spread northward along the Mediterranean coastline in August 2006.