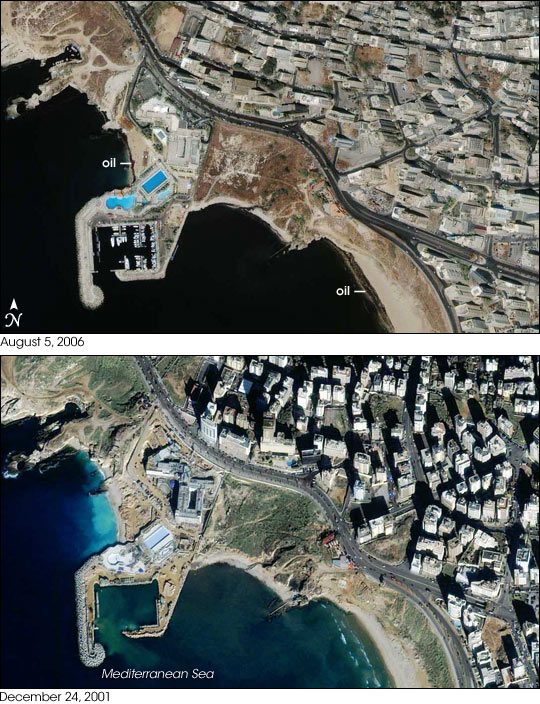 In the summer of 2006, the conflict between Israel and Lebanon caused an oil spill along the coast of Lebanon. Damage to the Jiyyeh Power Station in mid-July 2006 spilled thousands of tons of oil into the nearby Mediterranean Sea. Continuing hostilities delayed cleanup efforts along the Lebanese coast, and evidence of the oil slick was still apparent in early August.

GeoEye’s IKONOS sensor collected these images of Beirut on August 5, 2006 (top), and December 24, 2001 (bottom). The top image shows the aftermath of the spill, where oil coats the shoreline in an opaque layer of black. Although the oil is apparent along the beach, the black-looking surface of the water should not necessarily be interpreted as an oil slick. A satellite sensor may not be directly over an area when it makes an observation; often, it views the area at an angle. IKONOS not only acquired these images at different times of year, but also from completely different angles. Notice that the buildings in the top image seem to lean strongly to the left while, in the bottom image, they appear to lean slightly upward. They also cast different shadows. Such changes in angle and lighting can make the water surface look very different.

Besides different building angles, these images show other differences. In the top image, two swimming pools near the coast are easily identified by their pale blue appearance. In the bottom image, the pools still appear, but look empty. Likewise, the top image shows the development of docks, crowded with boats. Something consistent between the two images is the area just off the coast near the swimming pools. In both pictures, that area looks lighter than the surrounding ocean (bright blue in 2004, and tan in 2006), which is an indication of shallow water.