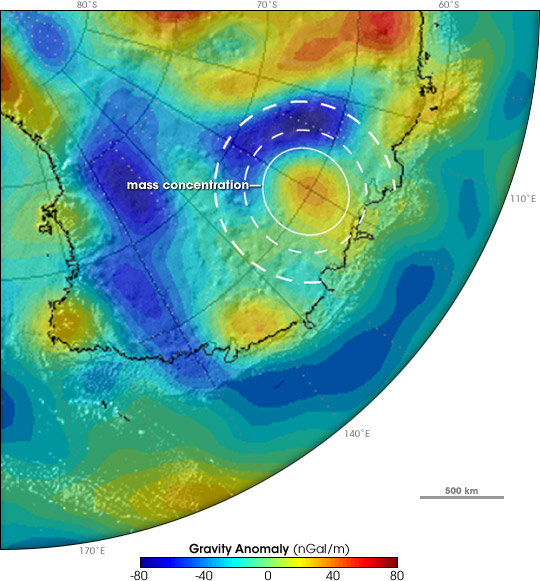 Compared to electricity or magnetism, gravity is a weak force, yet it affects objects as large as oceans, stars, and galaxies. Earth’s gravity is not uniform all over the planet. The planet’s valleys, ocean trenches, plains, and mountain peaks cause variations in the density of the Earth’s surface and, consequently, its gravity field. Launched on March 17, 2002, NASA’s Gravity Recovery and Climate Experiment (GRACE) takes detailed measurements of Earth’s gravity field from space. GRACE consists of two satellites that assess differences in Earth’s gravity field by tracking tiny changes in their distance from each other. Areas on Earth with greater gravity—known as mass concentrations—pull the leading GRACE satellite away from the trailing satellite.

In June 2006, researchers at Ohio State University announced that GRACE had found a mass concentration under the ice in East Antarctica. This image shows GRACE’s measurements of gravity, indicated in galileos per meter. Areas with more intense gravity appear in red, and areas with less intense gravity appear in blue. Yellow and green show levels in between these extremes. Not far from the coast is a 320-kilometer-wide mass concentration, outlined in white. This spot attracted the researchers’s attention.

The mass concentration GRACE detected indicates an area containing unusually dense material. Such mass concentrations can result from more than one cause. One possible explanation is an upwelling of volcanic rock from deep within Earth’s crust. Ralph von Frese, a geology professor at Ohio State University, proposed that the mass concentration may have resulted from an asteroid impact.

GRACE’s discovery is just the first step in understanding this mass concentration. More clues can come from a visit to the site, as well as chemical analyses that provide a geologic age for the rocks in that area. If the rocks date to the same time as the Permo-Triassic extinction, GRACE may have made an important discovery about the history of life (and death) on Earth.

In June 2006, researchers at Ohio State University announced that GRACE had found a mass concentration under the ice in East Antarctica.